With all of the talk about the Off Track Wagering facility just approved for the old Maestro 206 site, I thought I'd share this 1937 advertising postcard of one of the first establishments to do business at that location. The Three Towers was a banquet hall, nightclub, dance hall, etc. for at least a couple of decades from the 30s through the 50s. It was a tour stop for many nationally and regionally known big bands of the era, and later rock and roll groups.


I have seen some posts on Facebook putting forth the idea that this spot on 206 is a bad location for a restaurant because nothing ever lasts there. I am of the opposite opinion. I believe the OTW folks chose this location because it has proven itself for decades. Yes, the businesses have changed over the years - from The Three Towers to the Jolly Ox, Duke's Farm Inn, Jaspers, the brewing company (forget the name) CocoLa, Maestro 206 - but that's to be expected. It would be more of a surprise if the same business had been there for the past 75 years. Just my opinion. 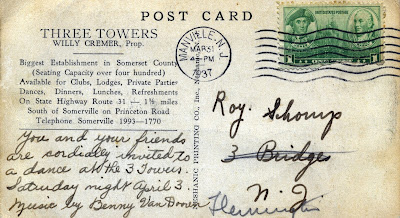 Posted by Greg Gillette at 9:41 AM