He purchased two telephone receivers and strung wire between his house and that of a neighbor. In less than two months Garretson had incorporated the Hillsborough and Montgomery Telephone Company with William C. Hendrickson, William M. Funkhouser, Louis E. Opie, A.J. Van Nuys, David J. Smith, and Jacob C. Gulick. Poles began to go up in 1904 in the service area of Belle Mead, Harlingen, Skillman, and Rocky Hill with 13 initial subscribers, quickly growing to 150.

Garretson was elected as president of the company, and he and co-founder Louis Opie remained on the board of directors throughout the 1920s and 1930s as service expanded to other sections of Hillsborough. When Bell Telephone erected poles in town for their long distance service in 1935, the rumor, quickly denied, was that they would soon acquire the Hillsborough company. In fact, independent phone companies were the norm in most of the US throughout the 1930s and 40s.


In the 1940s, Louis Opie succeeded Garretson, who died in 1937, as president. By 1941, with 300 subscribers in Belle Mead, Harlingen, Rocky Hill, Griggstown, Millstone, and South Somerville the seven employees of the company worked out of a bungalow on Route 206. Employees consisted of one construction superintendent, two linemen, and four female operators working eight-hour shifts to provide 24-hour service - something the company was proud to have provided since 1906.


In 1951 the company announced plans to provide dial service to its growing list of 750 subscribers within five years. On June 18, 1955, Hillsborough and Montgomery residents in the service area began dialing for the first time, using numbers that began with FLanders-9. Twelve operators lost their jobs to the new technology, but most were reassigned to elsewhere in the growing company - which by 1957 had 1,250 subscribers. The new tech - installed at a cost of $175,000 - also required an across-the-board rate increase for business and residential customers - the first since 1926.

The growing clerical and administrative staff, as well as the IBM punch-card computer, required a new building which was built in 1963 and is still occupied today by Century Link.


No survey of the history of H&M would be complete without a discussion of service complaints. In 1971 a group of residents calling themselves the Citizens Committee for Better Telephone Service circulated a questionnaire to residents about the quality of their phone service. Complaints included picking up the phone to find oneself in the middle of someone else's conversation, not getting a dial-tone, and the biggest - toll rates. Nearly every call outside the 359 exchange was long distance. Calls to Somerville and other nearby towns were all toll calls. Company representatives explained that because of complicated settlement agreements that every independent phone company in the US had with Bell, H&M was receiving significant revenue back from Bell - and besides, a very small percentage of H&M customers were making most of those calls, thereby subsidizing everyone else's regular monthly bill. 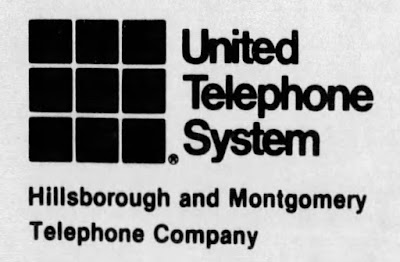 In January 1978 United Telecommunications announced plans to acquire the Hillsborough and Montgomery Telephone Company in a stock swap, but that the merger would not affect the rate structure. The acquisition became official the next year with all 102 H&M stockholders trading in their shares. On July 1, 1987, United Telephone merged all five of its Central Jersey telephone companies into one company called United Telephone Co. of New Jersey, and H&M ceased independent operations.
Posted by Greg Gillette at 8:00 AM