In 2014, partly as an excuse to post some photos of the old Belle Mead and Flagtown train stations, I described a July 5, 1894 letter from New York patent attorney Edmond Brown to his wife who was staying with her parents in Plainville - today the site of the Carrier Clinic's East Mountain Hospital. The letter was full of details about trying to arrange a brief Rendez-Vous as Mr. Brown's train passed Belle Mead on his way back to New York City from a Philadelphia business trip the next day. You can read the post here. 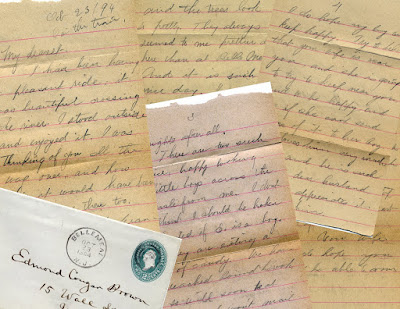 Three years later while browsing eBay I miraculously happened upon another letter between the couple - this time from wife to husband - dated October 23, 1894. You may recall from the earlier post that through the use of census records we were able to discover the reason that Mrs. Brown was "feeling poorly." Now, three-and-a-half months later, she knows what we knew - that back in July Mrs. Brown was in the first month or so of pregnancy.

An excursion by train from New York City to Belle Mead/Plainville in 1894 would necessarily begin by consulting a timetable such as the one above. Then it was off to the foot of Liberty Street and the Central Railroad of New Jersey's ferry terminal for the trip across the Hudson.

Mrs. Brown will pick it up from here:

My dearest - I have been having a pleasant ride; it was beautiful crossing the river. I stood outside and enjoyed it. I was thinking of you all the way over, and how it would have been if you were there too.

I am just at Cranford & Westfield now and the trees look so pretty. They always seemed to me prettier down here than at Belle Mead.

And it is such a nice day. I wonder if I can't send some of the pleasure to you. I shall try. And I shall think of you every night. Perhaps it will be only two nights after all.

There are two such nice boys across the aisle from me. I don't think I should be broken hearted if E. is a boy. They are eating a lot of candy. We have reached Bound Brook, so will soon be at B.M. I won't mail this until I am met. I do hope my boy will keep happy. Try to believe that your wife is near you, and she is going to try to keep near you and to be happy, and see if she can send some of it to her boy. She loves him very much, dear, and he is such a good, dear husband, and she appreciates it. She loves him.

I have brought out a couple of the little dresses to sew - though I may not do much on them. I am afraid I must stop now. With a heart full of love,
Your wife.

I do hope you will be able to come out.