The Presbyterian Church has a long, and more than a little disjointed, history in Hillsborough stretching all the way back to 1759. It was in that year that congregants borrowed a pastor from Bound Brook and met for the first time at the home of one of their members in Millstone. The next year they built their own church, sharing it with members of the Dutch Reformed Church until they built their own church in 1767.


In 1961 Rev. Dr. Orion Hopper got permission from the New Brunswick Presbytery to survey Hillsborough residents about a new church. Of approximately 450 households surveyed, nearly 200 expressed interest in joining a Presbyterian Church if there was one in the township. With this good result, a church was unofficially organized and the first Sunday service was held at the Hillsborough Consolidated School (now Hillsborough Elementary School) on September 24, 1961.


The Consolidated School made a good initial home for the church - especially after they were able to negotiate the Sunday rental fee down from $240 to $148 a month - but what was needed was a site for a church building. Longtime Hillsborough resident Clifford Cunningham owned 8 1/2 acres at the northwest corner of Route 206 and Homestead Road. For years he had been trying to get suitable zoning to operate a number of small businesses on the property but was continually stymied by the Planning Board. He did have one business there - selling log cabins to Boy Scouts and other outdoor recreation concerns - and to further that enterprise he built a model cabin on the site that also served as his office. By the end of 1961, Cunningham agreed to sell the property to the church, thereby providing them not only with the space to construct a new building but also, with the addition in 1962 of a proper steeple, a building to hold their Sunday service and other activities. This became known as the Log Cabin Chapel.


The church was officially organized with a service at the Log Cabin Chapel on May 12, 1963. Groundbreaking for the current familiar church building took place in April 1967. 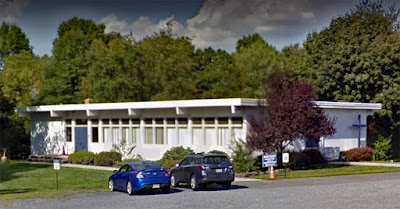 The Hillsborough Presbyterian Church celebrated its 50th anniversary in 2013, becoming one of the longest enduring congregations in Hillsborough, whichever way you count it!

Posted by Greg Gillette at 4:17 PM

Email ThisBlogThis!Share to TwitterShare to FacebookShare to Pinterest
Labels: Churches