You could drive down Amwell Road towards Clover Hill one hundred times - and for ninety-nine, you would miss the narrow lane off to the left, nestled between the driveways of five houses from the 60s and 70s, that leads back to one of the oldest farm properties in Hillsborough.


After three-quarters of a mile, the drive spans the Neshanic River at a small bridge to come to the homestead farm of Abraham Schenck. Schenck was willed the 162-acre property upon the death of his grandfather Peter Clover in 1822. He built the house that dates to that time and farmed the land for three decades before selling to Cornelius C. Polhemus in the 1850s.

Three generations of the Polhemus family ran the farm until 1927 when the Watertown Silver Black Fox Company came to town.

The Watertown company got its start in 1923 in Wisconsin when four men sought to capitalize on the growing silver fox fur craze by importing foxes from Canada and beginning a breeding program. Before long they had nine "ranches" set up and were looking to expand into New Jersey.

How they found the property in Clover Hill is unknown, but before long they had set up an office in East Orange and sent veterinarian Dr. Leslie Wright from Wisconsin to prepare the Clover Hill farm to receive foxes.


A silver fox is actually the same species as a red fox - the largest of the foxes - but with a variation in coloring from an ashen gray to silver to black. The fur of the silver fox - trapped in the wild for centuries before the advent of fox farming - is the most prized of the fox furs, worn by royalty throughout Europe and Asia.


Foxes began to arrive at Clover Hill in 1928, quickly growing from 80 to 400 in about 18 months. As the farm grew to be the largest silver fox breeding operation in New Jersey, Dr. Wright became a popular speaker at many area functions.


The foxes were kept in pens similar to the image above from 1927 - and there was always a watchtower whose lower floors were used for preparing food for the foxes and as office space for the farm.

Even after Dr. Wright died unexpectedly in 1930, the farm continued to prosper. It was also a popular destination for class trips and Boy Scout outings and the like. At its peak in the mid-1930s, there were 2,000 foxes on the ranch.

Around 1935, fox breeding ceased at the farm and the foxes were shipped to a farm in the Poconos where it was believed the climate would be better. The Clover Hill Farm switched almost immediately to raising turkeys under the name Clover Hill Turkey Farm with former Watertown Silver Fox employee Edward P. Lund at the helm. 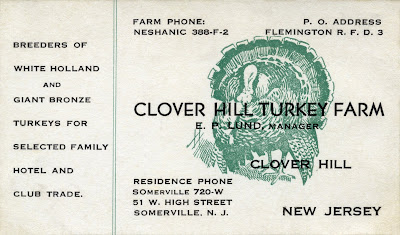 The turkey operation didn't last very long. By the end of 1935, Neshanic Station resident Earle Robertson - a native of Prince Edward Island where fox farming was perfected in the 1890s - began to study how to reopen the farm as an independent business. In December 1938, starting small with just two females and one male, through the ordinary nature of things he soon had eight.

Unfortunately, the trail grows cold in 1939, and it is not known how long Robertson continued with the Clover Hill Silver Fox Farm.
Posted by Greg Gillette at 5:09 PM