By 1907, James B. Duke was used to receiving phone calls at his New York office about some sort of trouble at his Hillsborough, N.J. estate popularly known as Duke's Park. If it wasn't a serial arsonist firing one of his barns, or hundreds of trees being uprooted by the 1903 tornado, it was damage from unruly picnickers or boys shooting craps at midnight under the glow of the electric lights at the Raritan Gate fountain. We can almost imagine this conversation from July 1907, "What is it this time - are those boys from Raritan making havoc in the spring house again?"

"Yes, Mr. Duke, something like that. Only two boys this time....and one of them is your son."

In 1902, tobacco tycoon James B. Duke decided to turn his country retreat in Hillsborough Township, N.J. into a magnificent country estate. He began purchasing lots along the Raritan River in 1893, eventually accumulating hundreds of acres where he bred horses and cattle and engaged in general farming. He now endeavored not only to plant hundreds of thousands of trees and shrubs, excavate enormous lakes, throw up grand mountains, and import a fortune in European bronze and marble statuary - but also promised to open the grounds of his park to the public.

He made good on that promise the next year - even as construction was ongoing. In these early years there were no actual gates at any of the many entrances to the park. Visitors were expected to be courteous and respectful. For the most part they were - until around 1906. Contemporary newspaper accounts from that year speak of everything from simple flower-picking to shattering of electric lights, the aforementioned nightly gambling, and automobiles run amok over lawns and footpaths. The tobacco tycoon went so far as to close the park from time to time - and indeed would eventually go to two days a week beginning in 1910, then once a month from 1915 until the park was permanently closed to the general public in the mid-twenties.

Still, nothing could have prepared him for the news that his soon-to-be stepson Walker Inman - Duke was engaged to Walker's mother Nanaline Holt Inman - and a friend, both twelve years old, had walked over to Somerville that July morning and purchased an air rifle and enough ammunition to get in some serious trouble.

By way of target practice, the boys shot out electric street lights all the way back to Hillsborough - and once back on the estate proceeded to take aim at Duke's prize ducks and swans! If that wasn't enough, they took potshots at the statuary - and at the Italian laborers who were working about the grounds. 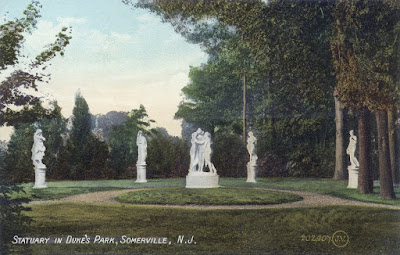 The New York Herald reported that Walker and his buddy "were finally disarmed after breaking nearly every pane of glass in the conservatories and other buildings, besides doing other damage."

There is no report as to the young Mr. Inman's punishment for engaging in such depredations - but we can only hope that he was made to pay for repairs out of his allowance.

Posted by Greg Gillette at 5:54 PM