Here's a political trick that never seems to get old - put doubt in the minds of voters by accusing your opponent of not being able to serve because they don't meet the eligibility requirements. No, I'm not talking about Donald Trump and Ted Cruz in 2016 (or Hillary Clinton and Barack Obama in 2008), but rather about the Somerset County Republican power-brokers and their eve-of-the-election campaign against political newcomer William J. Keys in November 1890.

Days before the election for New Jersey state senator, with the realization that the traditional Republican stronghold was about to pass to the Democrat Keys, Republicans began distributing fliers and posters insinuating that the native New Yorker had not been resident for the required amount of time in Somerset County or New Jersey.
The truth was that Keys, on the advice of friend and former NJ state senator Rynier H. Veghte, had moved to Hillsborough in 1884, purchasing the large estate on the Raritan River just east of the village of South Branch. 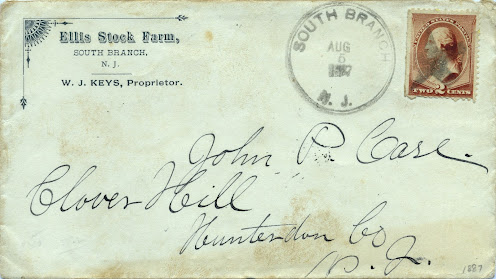 William J. Keys was born in Dobbs Ferry, New York in 1838. He made his name and fortune in the produce business running Manhattan's famous Washington Market. He made his political connections during the Civil War when he was given the contract - amid riots and unrest - of supplying the troops quartered in the city with rations. After the war, he added to his wealth by having interests in various steamboat lines.
Still, when he retired to Hillsborough and spent thousands renovating the three-story mansion on River Road, his desire was to only be a farmer. That didn't last long. Before he knew it he was being recruited to run for office. Now he was going to follow in Veghte's footsteps by being elected to the NJ Senate - because, of course, the Republicans last-minute dirty tricks campaign backfired and Keys was elected easily.

Keys was well-liked by his neighbors. He threw enormous parties at Ellis Stock Farm (named for his wife's family) and was known to help all in need. He was not a sporting man as far as hunting goes - but did have a racetrack on the property, and had one of the finest stables of trotters and pacers in New Jersey at that time. He served in the senate for only one term, eventually selling the farm and moving to East High Street in Somerville, where he died in 1911.

Posted by Greg Gillette at 1:54 PM