When operatic soprano Anna Case made her debut with the Metropolitan in 1909, much was made of the fact that she was the first American singer to appear with the famed company never having had any training in Europe. This fact only added to the fascination people had with the twenty-one-year-old daughter of the South Branch, NJ village blacksmith.

Unfortunately, her first trip to the continent in July 1914 couldn't have come at a worse time. As reported in the July 18, 1914, Courier News, her plan was to spend the summer traveling with a "girl chum" through France and Germany before returning for the fall opera season. The pair had the bad timing of being in the latter country when Germany declared war on Russia on August 1, and war on France on August 3.

With most of the continent mobilizing for war, Anna Case, along with thousands of other tourists, descended on the train stations looking for a way out. After an escape into Switzerland, she met up with another group of Americans at St. Moritz, including retired American Army Captain Philip Lydig. With the party now numbering a half dozen, and the mass of humanity on the train platform at St. Moritz threatening to bring a halt to their flight, Captain Lydig was able to snake his way through the crowd and commandeer a compartment - putting a sign in the window which read, "This compartment reserved for Capt. Philip Lydig, United States Army.

After some further subterfuge in Dijon, the group was able to board a military train bound for Paris. Anna Case eventually made it back the States by way of London and Montreal in time to fulfill an engagement for the home folk, giving a concert on October 9 at the Second Reformed Church in Somerville.

With war raging in Europe, Anna Case found herself stateside for the next five summers. She was finally able to satisfy her wanderlust in 1920, with an extended four-month trip that included a well-publicized recital at Queen's Hall in London, shopping in Paris, taking in the sights at St. Mark's square in Venice, and relaxing on the beach in Lido, Italy.

Her next trip across the pond in 1922 was notable for the number of intended destinations listed on her passport application - "British Isles, France, Switzerland, Holland, Italy, Belgium, Germany, Austria, Czecho Slovakia [sic], Jugo Slavia [sic], Spain, Monaco. Norway, Sweden, Denmark, Morocco, Gibraltar, Algier, Egypt, Palestine" - and for the return to New York, where she led the passengers in The Star Spangled Banner as the ship passed the Statue of Liberty in New York harbor.

Something new for 1924 as Anna Case began the new year with her first concerts in Hawaii. She closed each concert with "Imi Au Ia Oe" - which she made a record of later that summer, along with three other Hawaiian songs. She even found time to be photographed in a grass skirt playing the ukulele!

As her celebrity grew in the 1920s, news photographers were at the ports for nearly every departure and arrival. Calling out "Miss Case, Miss Case" - and even suggesting poses, like in the August 1924 photos where a reporter handed the departing diva a pipe, resulting in the iconic photo below.

Newspapers who ran the photo below of Anna Case returning to New York on the Leviathan after her summer 1925 European trek, proclaimed that she "looked glad" to be back. 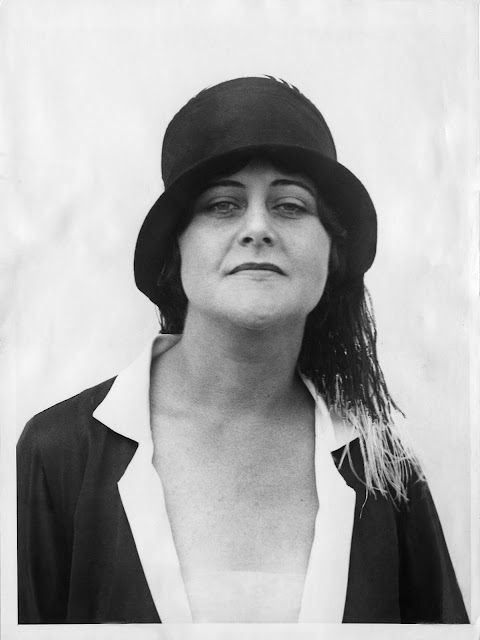 I'm sure she was, although it must have been bittersweet as her father Peter Case passed away on August 5th while she was still overseas. It was on this trip that she gave her first concerts in Germany.

She spent the 1925 Christmas holiday performing her second concert series in Honolulu. Fans and friends were sad to see her go in January, covering her in leis. She thanked them by singing a group of Hawaiian songs as she stood on the deck of the departing ship.

After nearly two decades of being photographed at the port of New York, the most widely printed photos of Anna Case are undoubtedly the shots of her returning from her honeymoon in England and Scotland with husband Clarence Mackay - the telegraph and cable magnate - on September 15, 1931.

This photo, or variations, appeared in most daily US newspapers in September 1931.
Posted by Greg Gillette at 8:46 PM