Upon entering the office of Miss Margaret Smith in the great coach barn of James B. Duke's Hillsborough, New Jersey estate, the first thing you would notice is a sign hanging over her desk with the simple request, "Be Brief". Visitors would do well to take heed, for, you see, the general manager and ultimate authority at Duke's Farm is a very busy woman.

The child of immigrant parents - her mother came from Germany in 1859, and her father was born in France - Maggie and her four sisters and two brothers moved back to New Jersey from Easton, Pennsylvania in the mid-1880s, possibly when Mrs. Smith was widowed. A teenager at the time, Maggie and her elder sisters Mary and Kate found work at the Raritan Woolen Mills, earning about $40 a month. After several years at the loom, Maggie decided to go to school in Newark to learn bookkeeping and accounting - and she arranged for Kate to go to cooking school and to receive training in professional housekeeping. The timing couldn't have been more perfect. As the Smith girls were completing their programs, J. B. Duke was making the first purchases of the acreage that would become his New Jersey estate.

It is not known how the Smith girls and J. B. Duke found each other. We do know that Maggie started work as an assistant to the estate manager as early as 1893 when Duke was just beginning to assemble the properties that would become Duke's Farm (later Duke Farms, then Duke's Park, then Duke Farms again!). She kept at this apprenticeship for five or six years and was given the reigns in 1898.

Duke soon turned over near-complete control of every operation of the estate to Maggie. It was reported that it was absolutely no use calling him at his New York office or apartment. When he wasn't around, she had the last word - and eventually, even when he was around. The tobacco tycoon had such confidence in the Raritan mill girl that she was in charge of the cash, the books, hiring, firing, approving all requisitions - whether for a set of crockery or thousands of shrubbery - and writing all checks on her own account.

She had the combination to the huge safe in her office (you can still see it today) and held her ground during the violent labor strikes of 1903 and 1907. The years between 1898 and 1908 were undoubtedly the busiest decade ever at Duke Farms - with the series of artificial lakes being excavated, hundreds of thousands of trees and shrubs to plant, and upwards of 400 laborers of all kinds employed on the estate at any one time. In 1904 she even hired a private mounted police force to patrol the grounds. They all answered to Miss Smith.

Along with sister Kate, Maggie also supervised all of Duke's social events at "the farm". Arranging for transportation for guests, planning meals and activities, and often acting as hostess for the millionaire bachelor. For all of this, she was paid around $5,000 a year - a ten-fold increase from her wages at the mill - as well as being given trips to Europe and valuable tobacco stock as Christmas gifts.

Maggie, and Kate - and another sister Mary who was later employed as a housekeeper - were frugal with their wages, accumulating enough to donate generously to Catholic charities and even have a large window installed in the church in Raritan as a memorial to their mother. 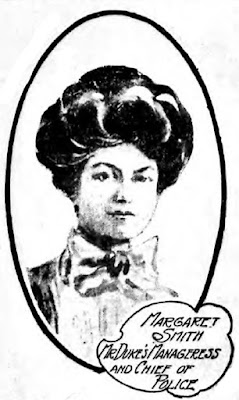 Maggie Smith and her sisters were known to be very protective of Mr. Duke. When he suddenly, secretly, wedded wealthy New York divorcee Lillian McCredy in 1904, Maggie must have been shocked. When Duke sued for divorce a little more than a year later, Mrs. Duke counter-sued, alleging that the Smith girls rebuffed all of her requests and made her feel like an unwanted guest at the Hillsborough estate. She went on to allege improprieties between Duke and Mary Smith - vehemently denied by Duke.

In May 1907, the Daily Press of Plainfield reported that Maggie Smith had resigned from Duke Farms to take a job in New York as treasurer of one of the Duke companies, ending her time in our area. But for a few years, a mill girl from Raritan was the most powerful woman in Hillsborough, perhaps the county. In her own words, all it took was "hard work and a will to succeed." You couldn't ask for a briefer prescription than that.
Posted by Greg Gillette at 8:00 AM