In April of 1971, as Hillsborough was preparing for the celebration of its bicentennial the next month, local and county Democrats got together to do something novel - start a bank. The list of organizers reads like a who's who of Somerset County politicians - Hillsborough Mayor John Guerrera, former county Democratic chairman John J. Carlin, Jr,, county prosecutor Michael Imbriani, Hillsborough Township Committee member Michael Cinelli, township judge Stanley Purzycki, Bernardsville Democratic leader Andrew Erchak, and Richard W. Herman, president of Hermann Services trucking and warehouse firm - of which Michael Cinelli was vice president. 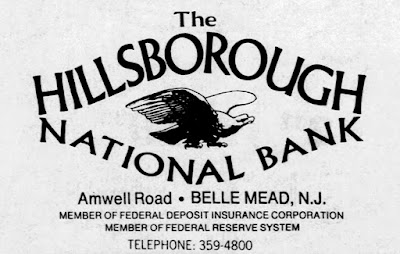 Also on the list of organizers was William Bruce Amerman, George R. Farley, Albert J. Macchi, and Sylvester L. Sullivan. Approval was granted later that year for the Hillsborough National Bank, with an expected opening in 1972 at Route 206 and New Amwell Road. The proposed location was subsequently changed to the site of the A&P Shopping Center under construction at the intersection of Route 206 and Amwell Road.

The bank, with an initial capitalization of $1.75 million, opened in a "mobile banking center" on the site of the shopping center in September 1972, and quickly grew to total assets of near $4 million.


Sylvester Sullivan served as the first president and chairman of the board. He was replaced by the appointment of Michael A. Cinelli as president on June 1, 1973. Cinelli, besides being a township committeeman and former president of the Hillsborough Township Board of Education, held a master's degree in finance from NYU and worked in the banking industry before becoming vice president-finance for Hermann Services, Inc.


Many of the first shareholders in the bank were Hillsborough residents. Hillsborough National Bank highlighted this in a series of ads which ran in 1973 and 1974, Recent Hillsborough High School graduate Alan Kravette was in the first ad, which subsequently featured the Fierst Family, George and Janet Wulster, Santa and Felix Carlisi, and the bank staff.


The new main offices broke ground on September 29, 1973, and opened one year later. The 10,000-square-foot building was a contemporary design by the firm of Eckert & Gatarz of South Brunswick.

Hillsborough National Bank also opened a location that same year at the corner of Route 206 and Triangle Road - the building now occupied by Levinson-Axelrod. It was at this branch on April 30, 1981, that a man entered and handed the teller a note which read, "I have a gun, put the money in the bag if you don't want to get hurt." He escaped in a waiting getaway car driven by a "dark-haired woman." Police noted that this was the fourth bank robbery in Central Jersey since the beginning of the year.

"Our customers will get additional convenience. For example, people holding automatic teller cards will be able to use Franklin State's Treasurer machine at more that 6,000 terminals statewide and national."