The Asbestos Inn - not to be confused with the Asbestos Hotel - was a roadside tavern on Camplain Road in Hillsborough Township, just over the border from Manville. Said to have opened in 1930 - which seems at least three years too early for a tavern since Prohibition didn't begin to be phased out until the end of 1933 - the name of the establishment was changed at some point to Pal's Inn, probably for owner Charles Palahach.


Meanwhile, in the summer of 1933 former Manville Police Chief John Jasinski was busy building a "combination residence and dance-hall" for his parents at the southeast corner of Camplain and Sunnymead Roads. Described as "the largest frame structure erected in Hillsborough Township in [the] last several years", the two-story house portion of the building was to be 44 by 22 feet, while the dance hall was planned for 67 by 32 feet, with an upper balcony.

The establishment opened in 1934 as New Hall Tavern. A December 1936 shooting at the tavern led to an investigation by the state Alcohol Beverage Commission which uncovered discrepancies in the state license application. Although Frances Jasinski, the sister of the Manville Police Chief, applied for the license and was listed as the owner, she actually had nothing to do with the business and was being used as a "front" by John Jasinski to conceal his ownership.


Their license was suspended for sixty days, and Jasinski was ordered to sever all ties with the business before they could reopen. The New Hall Tavern re-opened after the 1937 suspension and continued for several years. In April 1945 the New Hall Tavern property was sold by Jasinski to Mr. and Mrs. Palahach. They promptly moved Pal's to the new location and began regularly advertising Friday and Saturday night dancing with live entertainment later that year.

It would be difficult to find anyone who remembers the acts shown in the collage above - but they were popular entertainers in their day: Gay Young's Trio, The Village Chestnuts, Frankie Bourke's Trio, Charlie Allo and Carol Nye, Joe Zoppi, The Joe Mack Duo, The Three Jacks, and Johnny Carhart were all regulars at the popular weekend nightspot.

Charles Palahach sold Pal's in 1951 to Joseph and Mary Tomco of Manville who ran the place for a couple of years before selling to Edmund and Mary Jankowski in 1953. Almost immediately they decided to take the club in a new direction by introducing the area to country and western music.


Unlike the previous incarnation of Pal's which featured local and regional acts, the Jankowskis were able to book some national acts to appear on the Pal's stage. Big names like Smokey Warren and his Arizona Trail Blazers appeared alongside Paulette Marshall and her Western Dates, Chuck Palmer and his Rhythm Ranch Riders, The Western Capers, and the recently deceased Christopher Villano who performed as Chris Val and the Western Playboys.


Mary Jankowski passed away in 1960, and Edmund married second wife Catherine Vespromi in 1962. They continued to run the business successfully for another decade-and-a-half. Then on August 1, 1986, this small ad appeared in The Courier News:

Within a year the Jankowskis sold the property to Mario Baccarini who remodeled and reopened the establishment as Alfredo's Deli. 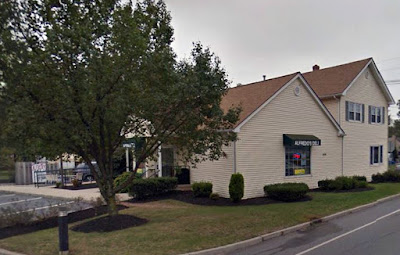 Posted by Greg Gillette at 8:08 AM