The Somerville Carnival - circa 1907

We all remember the sights and sounds of the summer carnival. Whether to benefit a local hospital, church, volunteer fire company or, as with the Hillsborough Rotary Fair of today, a civic organization, the annual carnival in Somerset County dates back to the 19th century.

In the early years of the last century, many Central New Jersey organizations, including the four Somerville volunteer fire companies, engaged the Excelsior Carnival Company to provide the rides and entertainment for a week of fun. Excelsior, under manager W.S. Miller, was in business for at least a couple of decades and sometimes billed themselves as a circus - but there were some important distinctions. Traveling circuses in those days usually came with elephants and menageries and trapeze artists and most importantly equestrians - the royalty of the circus. A company like Excelsior, on the other hand, while employing many "tent acts" did not have nearly the spectacle of a real circus. But that doesn't mean they didn't employ top-name entertainment.

Filling the gaps left by the lack of elephants and horses were many interesting and entertaining vaudeville acts. A look at Excelsior's roster for the 1905-1908 period gives us a clue as to what one could expect at the carnival.

Of course, the nationally known acts were the real draw to the carnival. First among these was Professor H.S. Maguire and his "educated" horse, Mascot. Mascot was famous for being able to add and subtract and they had a long career in carnivals and vaudeville.

Excelsior usually had an escape artist on the show, most notably during this time period Don and Dot Ford. They performed all of the usual escape stunts - handcuffs, straitjackets, even water submersion. They would even accept challenges to break out of the town lock-up which they pulled off in great style during the 1906 tour in Plainfield, Morristown, and Somerville!

One of the most famous acts to ever appear with the Excelsior Carnival Company was Gus White's Punch and Judy Show. Punch and Judy shows were being performed for 100 years before Gus White saw one as a young man and realized he could do better. He built all of his own puppets and elaborate stage sets and soon had the best-known show of its kind in America.


While there is no reason to believe that Somerville's fairgrounds or shows were segregated, we do know that some of what our great-grandparents found entertaining would be highly objectionable today - minstrel shows and other black-face entertainers were common during the period and were employed by Excelsior. 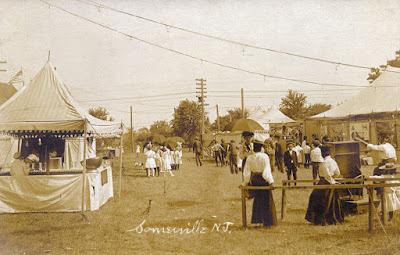 In 1907 the carnival was in Somerville from July 3rd through July 13th. There was record-breaking attendance on Saturday, July 8th, and great weather for the entire run. And the best news, each of the four fire companies received a net profit of $100!
Posted by Greg Gillette at 3:09 PM

Email ThisBlogThis!Share to TwitterShare to FacebookShare to Pinterest
Labels: Somerville