On Saturday afternoon, April 30, 1910, excited passengers tumbled out of the cars of the Lehigh Valley Railroad's Buffalo express train as it made its scheduled 3:45 p.m. stop in South Plainfield. They hurried to the station agent eager to share what they had just witnessed as the train passed Flagtown - the greatest and most daring train hold-up in Hillsborough, and possibly New Jersey, history! 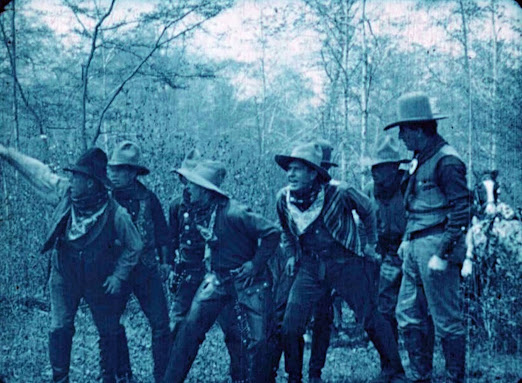 The South Branch Railroad - a division of the Central Railroad of New Jersey also called the Flemington Branch - runs parallel to the Lehigh Valley Railroad's mainline in the vicinity of Flagtown affording the Lehigh Valley travelers a view of the stopped locomotive and the South Branch passengers lined up outside the coaches as armed bandits, some on horses, held them at gunpoint and went through their belongings. 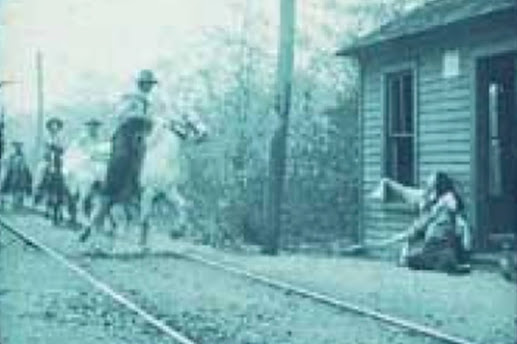 The daring caper had been planned long in advance, you might even say it was well-scripted. The bandits arrived at the scene early, riding through the Hillsborough woods before dismounting at a small clearing. Their leader described the plan. Disguised as a railroad flagman, he would go out onto the tracks with a red flag and stop the train between Flagtown and Neshanic. Once the train was stopped he would approach the engineer's cab with revolver drawn. 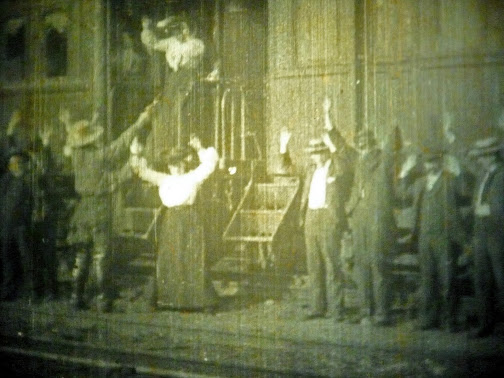 Another of the gang held the conductor at gunpoint while three bandits headed for the coaches. The panicked passengers dove under their seats and screamed for help, but to no avail. One passenger, E.J. Sanborn, was shot through the arm as he leaped at a robber in a desperate attempt to disarm him. Things seemed to be going well for the gang until they made their way to the first passenger car.

It was here that the outlaws ran into two visitors from Virginia - F.J. Halley and R.J. Wilson - who were packing pistols of their own and returned fire. It was just then that the Buffalo express was passing on the Lehigh tracks in time to see some of the passengers from the second and third coaches of the South Branch train - who had been lined up alongside the tracks - realize they had their own firearms tucked into their belts. A general melee ensued. Mr. Wiley who had been guarding the safe in the express car jumped from the car and was met with a shower of bullets, but managed to get off a couple of good shot s dropping one of the desperados, then another. 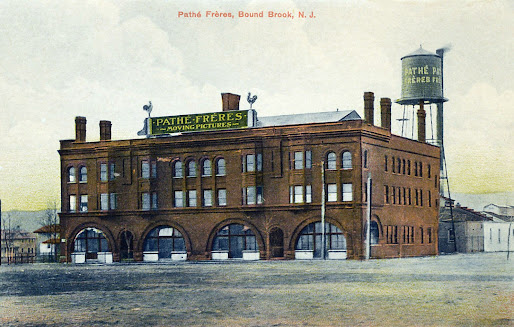 There's more to the story - including how the bandits were eventually captured with the help of the two small children of the Flagtown station agent. But it is unlikely any of those scenes took place in Hillsborough. What those passengers on the Lehigh Valley Buffalo express actually witnessed that April day in 1910 was the filming of the train scenes for one of the first American features produced by the Pathe Freres film company - The Great Train Hold-Up.
Pathe Freres actually opened a large film processing facility in Bound Brook, NJ in 1907, but it wasn't until 1910 that they entered the American market with narrative films of their own. Scenes filmed around the Flagtown train station were shown in some theaters independently of the full movie in May 1910, with the entire film - all 950 feet of it - being released later on June 25.
Although the film was a sensation upon release and was well-received by critics, it appears to have never been re-released and may exist now only in the hands of collectors. The first two images in this story are from the film, the third is possibly from the film. Other than those few images and the descriptions of the action from industry trade journals nothing seems to be left from The Great Train Hold-Up of Hillsborough!
Posted by Greg Gillette at 7:30 AM