"Hurray, Hurray, the Country's Risin' – Vote for Clay and Frelinghuysen!"

One of the largest political assemblies in the history of New Jersey took place in the tiny Hillsborough Township hamlet of Millstone the first week of August 1844.  The occasion was the annual convention of the New Jersey Whig Party, and the wholehearted endorsement of the Whigs' 1844 presidential and vice-presidential candidates.


The New York Tribune reported, courtesy of one of their affiliated newspapers, that by 11 o'clock in the morning, 782 wagons had already passed over the Millstone River Bridge, and by the time festivities began at 1 pm there were 4,005 wagons in the village!  It was estimated that more than 20,000 residents of Somerset County and the surrounding areas came out that afternoon to show support for the candidates. Delegations from Essex and Middlesex Counties arrived in schooners and sloops by way of the Delaware and Raritan Canal with, "their thousand banners floating in the breeze, strains of vocal and instrumental music swelling on the air, and all the regalia of a triumphant and victorious army."

The enthusiastic response may have had something to do with the fact that the Whigs' candidate for vice president was former United States Senator and Millstone native, Theodore Frelinghuysen.  He was born in the village in 1787 and enjoyed a long career as a lawyer, New Jersey Attorney General, Mayor of Newark, and US Senator, before being elected president of New York University in 1839.

Hillsborough Township was well represented at the event, with both J. Wykoff and P. Beekman being appointed as vice presidents of the state party.  Alas, it seems the two national candidates were not present that day, but there were many speeches given by distinguished Whigs, most denouncing utterly the ambitions of the "Loco-Focos" - the radical Democrats of the day.

The primary issue of the 1844 election was slavery and the potential annexation of Texas.  The Whigs were against the annexation of Texas, wishing to keep the delicate balance between free and slave states.  The Loco-Focos were for annexation.  James K. Polk emerged as the unlikely Democratic flag-bearer -  America's first "dark horse" candidate. He received no votes on the first seven ballots at the convention, in contrast to Henry Clay, who the Whigs chose unanimously on the first ballot. 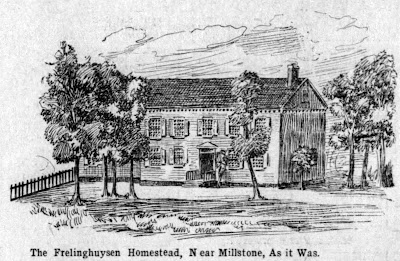 Clay and Frelinghuysen ended up losing the popular vote by 38,000 - out of 2.7 million votes cast and lost the electoral college 170-105.  Third-Party anti-slavery candidate James G. Birney collected more than 2% of the popular vote and may have cost the Whigs the election. His 15,000 votes in New York, where Clay and Polk were separated by only 5,000 votes, probably tipped those 36 electoral votes to the Democrats, depriving Hillsborough of its very own home-grown vice president!

Posted by Greg Gillette at 4:29 PM