Take a drive west from Hillsborough down Amwell Road, and just past the village of Clover Hill, you will come to the intersection of Cider Mill Road. Only a few Hillsborough residents will know firsthand why the road is so named, but the rest of us can surely guess!

Around 1869, Zebulon Stout started making cider and vinegar at his farm near Reaville. After partnering with John P. Case sometime in the 1870s, the operation was relocated to Case's farm near Clover Hill.
They processed apple juice, but their biggest seller was apple cider vinegar. The Clover Hill location produced and sold between 2,500 and 5,000 barrels a year during the last decades of the 19th century right up through the sale of the business to E. B. VanAtta in 1906. 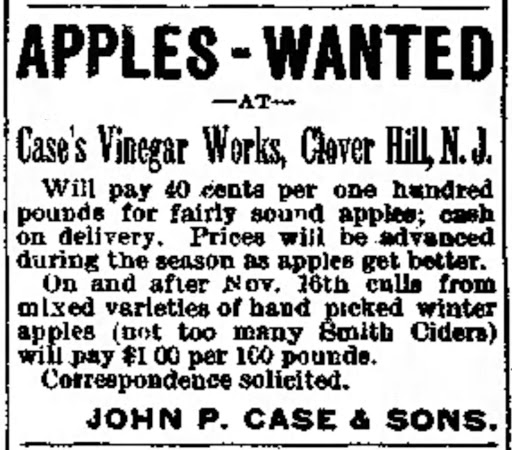 VanAtta built a new plant in Flemington, at which time Case's son repurposed the property as a chicken farm. The cider-vinegar works distillery burned down in 1957.

The original farmhouse - built in the early 1800s, enlarged in 1883, and lovingly restored by Jo-An' Van Doren in the 1980s - as well as some of the outbuildings pictured in the advertising postcard, can still be seen on the north side of Amwell Road, as shown in the aerial photo above.
Posted by Greg Gillette at 9:06 AM