The last great flurry of construction at the Hillsborough Township estate of tobacco tycoon James B. Duke took place between 1912 and 1915 and was to have concluded with the long-planned mansion on the hill. Already in the works for almost ten years by 1912, the project ultimately never got past the foundation and steel framework and was eventually abandoned.


Concurrently, Duke was working on another section of the estate which started to be laid out around 1912 and was finished by 1914. We might call this "The Fountain Terraces" as it was so described in a number of contemporary postcards.

The completed formal garden of fountains, waterfalls, trees, flowers, and domed "garden temples" was featured prominently in the October 1914 edition of "American Homes and Gardens".

We can see where the Fountain Terraces was located by overlaying the 1931 aerial view of Duke's Park onto a Duke Farms visitor map.


Perhaps the best view of the Fountain Terraces comes from a 1931 aerial news photo in my personal collection. In this photo, Turtle Lake is at the bottom and we are facing east.

In the next version, I have added a key for viewing the scans of the postcards from my personal collection which appear below.

I hope the postcards give some idea of the beauty and especially the work that went into creating this special place. But don't take my word for it. Here's a video of a ten-year-old Doris Duke circa 1922 riding her cart through the Fountain Terraces (relevant video begins at 1:07):

So, what happened to the Fountain Terraces? This blurb printed in the August 20, 1938, edition of The Courier News gives us a clue...

...and these photos from the Doris Duke Photograph Collection at Duke University seals the deal.


After her marriage to James Cromwell in 1935, priorities at the old Duke's Park began to change. These changes included the destruction of the Fountain Terraces, and also the destruction of the massive fountain complex across from the Great Falls. And culminated in the construction of a Robert Trent Jones designed golf course which lay waste to the estate in 1939. 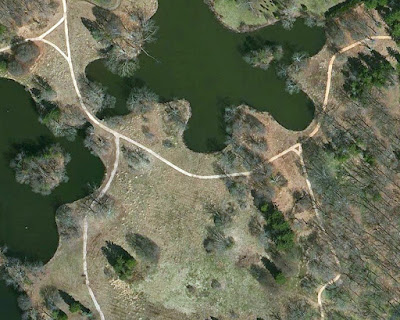 There is no trace of the beautiful Fountain Terraces at Duke Farms today.
Posted by Greg Gillette at 4:52 PM