Leon Wells Washburn may not have been a born showman but as the adopted son of wild west show impresario E.S. Washburn, he certainly made the most of his familial circumstance. By the 1880s he had already started several circuses and pavilion shows and was well known for his "Uncle Tom's Cabin" touring show - a popular dramatization of Harriet Beecher Stowe's well-loved and influential 1852 book. 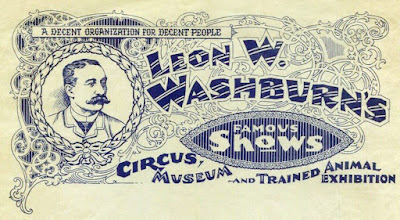 In 1906, with a couple of decades of successful seasons behind him, Washburn decided to establish winter quarters for his circus in central New Jersey. In October he purchased the Vermeule farm on River Road south of Bound Brook (near today's Centennial Avenue) and moved four large elephants onto the property, along with other animals from his menagerie. Local residents got a kick out of seeing elephants roaming over the property - until it got too cold and they were confined to their heated barn for the winter.


The 1907 circus season ended with a big show in New Brunswick in September, then it was back to the Vermeule farm for Washburn's elephants, ponies, camels, dogs, bears, monkeys, and lions to winter over another season. Things got off to a rocky start in 1908 when Nero, Washburn's big lion, got loose inside the circus tent with a full crowd in attendance during a Connecticut show in June. After the panicked throngs ran for their lives, keepers were able to coax Nero back to his cage with hunks of raw meat.

But Nero's biggest and final adventure took place on October 1, 1908. It was about 7pm the night before that Nero was found to be missing. He had already been placed into a cage to be transported for an exhibition in New York, but while the keepers were busy with other work, he pried apart the bars, took a couple of bites of Dook the Camel and made off towards the Raritan River.


The alarm was raised and Washburn circus hands fanned out across the countryside with some trepidation. Trolley operators on the River Road were told to try to run down the lion should he be seen. The New Brunswick police were alerted, but Patrolman Reed probably spoke for the rank and file stating, "You bet I'll look out for the lion. And I hope I see him before he sees me. But if my job includes chaining up lions I'm going to resign right away."

The search resumed early the next morning. The posse went to the home of Edward Radel - manager of the New Brunswick Traction company and widely known as a crack shot with a rifle. Radel was ready with his rifle but had no ammunition. Still just 5:30 in the morning, he jumped in his auto and sped with all possible speed to a Bound Brook hardware store and was lucky to find a clerk in the vicinity who opened the store and gave him a box of cartridges.

Reports soon came in that Nero was on the farm of Edward Clark "leisurely devouring a heifer". By the time Radel and his party arrived there were about thirty spectators at the scene. Radel took his shot from a distance of 200 feet, hitting the big lion right between the eyes.

Washburn offered to buy the carcass of the 800-pound beast, but Radel said that he had won it in a fair fight and that it was his. Nero was skinned within a few hours by a local butcher and the hide was sent to a Newark taxidermist to be made into a rug, but not before a photographer from the New Brunswick Home News was able to get a photo of Nero, Dook, a half-devoured calf, and the other principals.
Posted by Greg Gillette at 12:03 PM