In 1893, when the tobacco magnate James B. Duke bought the first farms that would make up his Hillsborough Township, NJ estate, he didn't immediately think of building a public, or even a semi-public, park. His interests were in racehorses, prize-winning bulls, and farming. Nevertheless, because two major public thoroughfares - the River Road from South Branch to Harmony Plains (Manville) and Woodville Road (Duke's Parkway West) - ran through the estate area residents already had tantalizing glimpses of the grounds.


It wasn't until 1902 that Duke began laying out the park in earnest, including importing a fortune in bronze and marble statuary from Europe, building dozens of magnificent fountains, paving miles of roads, and planting hundreds of thousands of trees and shrubs. Even after a freak storm uprooted trees and destroyed the electric light system in 1903, Duke was not deterred. He began work again - including excavating the first of the many artificial lakes.

Duke's Park, as it came to be called, became a tourist attraction that year - but didn't really become a hit until people started arriving in automobiles around 1905. Apparently, the size of the park was too great to enjoy by carriage. It wasn't long before enterprising entrepreneurs began to offer automobile tours through the park. Five and seven-passenger luxury touring cars could be seen navigating the macadamized roads on most fair days.

The hordes of visitors - some from out of state - soon brought destruction and vandalism to Duke's showplace. He toyed with closing access, but as there were no gates at that time, that was problematic.

Reporters toured the grounds many times between 1905 and 1915. Here are some excerpts from a Home News reporter's visit on September 30, 1906, illustrated with photos and postcards from the collection of this writer:


"A $200,000 Italian fountain of stone and marble stands at the entrance, the central stream rising from a mammoth shell and smaller streams being sent gushing from the mouths of huge frogs of green bronze grouped about the central figure. At night the fountain is lighted with artistic electric lights. There are numerous other fountains about the estate, not as elaborate, but beautiful to behold."


"A short walk brings the visitor to the carriage house, a handsome stone structure, with tower and clock, illuminated at night, tolling off the hours. The stables are models of luxury. They are adorned with rich rugs, with handsome oil paintings on the walls, and equipped with every kind of vehicle. Several of the mural decorations are 8 by 26 feet. Four of them represent the four continents."

"A new part of the estate is now in the hands of the landscape artists, who are laying out roads and having them macadamized, building hills and cutting valleys, giving the land a rolling appearance, digging lakes, in short, transforming an ordinary stretch of farm into a beautiful park."


We can now jump ahead to June 1912 and follow another Home News reporter as he concludes his tour of Somerville and Raritan with a visit to Duke's Park.


"We rode into Duke's Park by way of the Raritan entrance, that brought us to about the middle of the estate, which, by the way, occupies five square miles."

"The first glimpse we had of the park told us just what means of viewing it was properly due to its magnificence - a pair of prancing, pure-blooded horses, with tossing manes, a coachman and footman in livery, a large and rich carriage, upholstered and be-cushioned, might pass well, but the proper means is just what we had  - a luxurious automobile, massive and dignified."

"No word-picture can describe this five square miles. It is one vast masterpiece of engineering, landscape gardening and building. It is wonderful."

At least two of our party had travelled [sic] in Europe as well as half over America, but those two admitted that they had bever seen a park to compare with it. [N]owhere that our party knew of is there the variety, the unexpected beauty breaking in at every turn - the hills with their wide-stretching views... 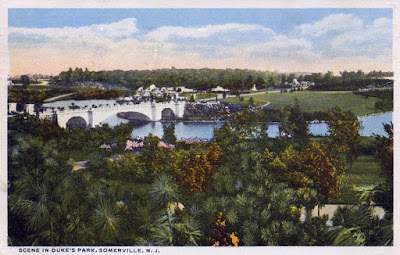 ...the cool and sparkling fountains... 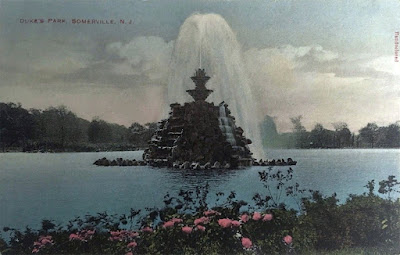 ...the softness of the long reaches; the wealth of shrub and flower - that Duke's Park possesses. It is a revelation."

"We rode along avenues of overhanging maples, with their delicate green boughs... 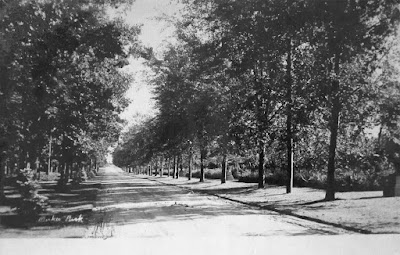 ...we passed through forests of rhododendrons... 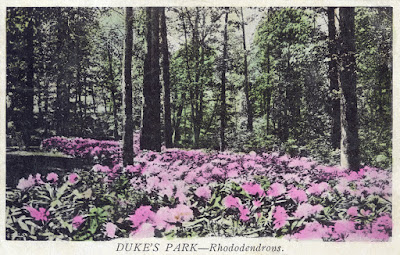 ...we skirted the fringe of thousands of beautiful Colorado blue spruce... 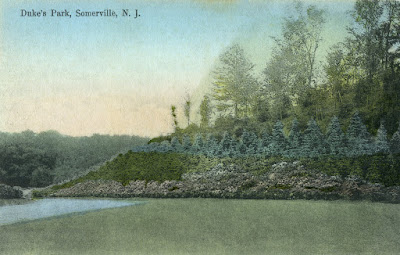 ...we halted beside the artificial lakes, each with its great fountain throwing up volumes of spray which fell from dolphins held in the arms of mermaids or shot upwards from the basins of rock." 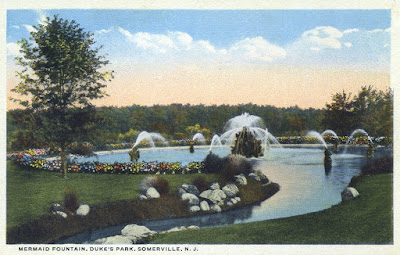 "At one of these fountains we stopped and walked up the pass to come to its edge. Here the spray sprinkled us and cooled us.


As we looked into the lake beneath we saw the rainbow in all its lovely colors and tints. We looked to the sky but saw no rainbow there; the waters had caught the coloring and stamped them on its bosom."

"We stopped again before the wide expanse of lawn, smooth as any carpet, and saw the great mansion, commenced for the new home of the proprietor, a wonderful home for any man, with its tunnels of concrete issuing into the wooded be-flowered park." 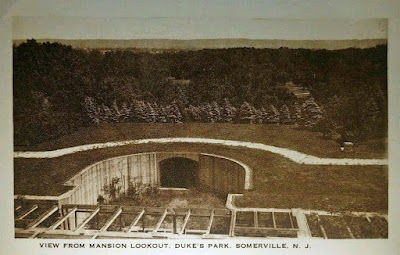 "It is good of the proprietor to permit the people to drive through and thus to give them a sight that they can never forget." 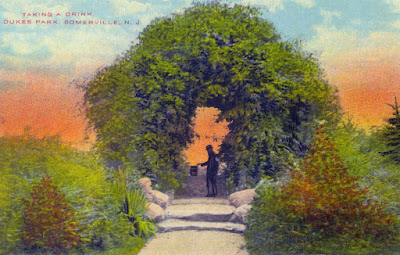 Unfortunately, not all guests were as appreciative as the Home News reporter.


In July 1915, three hundred farmers from Pennsylvania  - in 100 automobiles - descended on Duke's Park and did considerable damage to the grounds. Duke, who had been opening the park only Tuesdays and Fridays since earlier in the decade now decided to only open one day per month - a day that would be announced without much notice.

Today [2020], although Duke Farms isn't the spectacular showplace it was a century ago, we are fortunate to be able to walk the grounds, take in the natural beauty, and imagine the scenes described above.

Posted by Greg Gillette at 3:18 PM