Much has been written about our state's famous namesake battleship, New Jersey. She is the most decorated battleship in naval history, having participated in World War II, the Korean War, the Vietnam War, and the Lebanese Civil War of 1983/1984.

Less is commonly known about Hillsborough Township's own namesake warship, the USS Neshanic (AO-71), one of five Chiwawa Class oilers named for rivers with Native American names. Oilers are used for refueling and for transporting petroleum products.

Built in 1942 at the Bethlehem Shipyard in Sparrows Point, Maryland, the USS Neshanic was commissioned on 20 February 1943 and saw service in the Pacific during World War II. It was the second American ship to bear that name. The first was a 271-ton steamship built in Cornwallis, Nova Scotia, in 1870. The coastal freighter sailed out of New York plying the trade routes up and down the east coast and was still in service as late as the 1920s.


Neshanic's most meritorious moment came on 18 June 1944 off of Saipan. For about two hours that afternoon, Neshanic and other support ships were under continuous Japanese air attack. At 4:42 P.M. she took a direct hit from a 100-pound bomb, which landed on the cargo deck, but luckily did not pierce the deck through to the fuel tanks.

Thirty-three crew members were injured fighting the ensuing fires, which were quickly brought under control. Neshanic then exacted her revenge - gun crews were able to bring down two Japanese planes.
The USS Neshanic received nine Battle Stars for service in the war before being decommissioned on 19 December 1945. She was later sold to the Gulf Oil Corporation, sailing as the SS Gulfoil, until the damage caused by a collision with a tanker off of Rode Island in 1958 precipitated a sale to the Pioneer Steamship Company.

Pioneer repaired the damaged ship, lengthening it from 500 to 730 feet, and converting it to a straight deck bulk carrier for service on the Great Lakes. In 1962 she was sold to the Oglebay Norton Company and renamed SS Middletown. 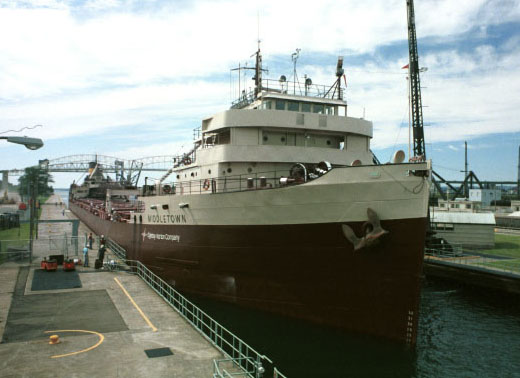 In 2006 she was sold to Liberty Steamship Company and renamed SS American Victory.

In December 2017, Hillsborough's 21,000-ton war hero was sold a final time to Algoma Central and was subsequently towed through the Great Lakes and St. Lawrence Seaway to make its way to a Turkish scrapyard.
Posted by Greg Gillette at 11:59 AM