Cows at a Crossroads

To some, the auction sale this week of Norz-Hill Farm's entire herd of milking cows may seem like a trivial matter. Many expect these "small" operations to go out of business. After all, they couldn't possibly be as efficient as some corporate mega-farm in the midwest.

The fact is there is nothing trivial about it. This was a major operation - and not just by New Jersey standards. Norz-Hill farms 275 dairy cows comprised a herd that was twice the size of the average U.S. herd of 135, and about three times the size of the 77% of American dairy farms with herds of fewer than 100 cows.

Large-scale dairy farming in our area is not a centuries-old industry, but rather paralleled New Jersey's suburban population explosion. The loss of Norz-Hill Farms dairy operation closes a chapter in Hillsborough's agricultural history, and now joins egg production, peaches, and other past farming specialties that are no more.

The Norz-Hill cows also played a not so insignificant role in my move to Hillsborough in 1993. Having grown up in a town whose last "cow-crossing" sign was probably taken down around 1970, it was wondeful to discover that there still existed a place in New Jersey that was so much like the one of my childhood. And it didn't hurt that Patty was, and is, crazy about cows.

This photo, taken acrosss the road from Norz-Hill farm in 1993 as we contemplated our move to Hillsborough, says it all. 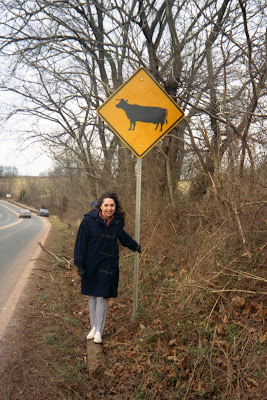