Now that Somerset County and Hillsborough Township have at last gained control of the Belle Mead GSA Depot property, what's next?

This major accomplishment, three years in the making, means that the project is only half finished - if that. Two major components remain to be completed. One is the cleanup of the contaminated areas, and the other is the actual construction of a recreation "Mega-Facility" - sure to be the envy of towns across New Jersey.

What will this awesome facility look like? The designs have yet to be completed, but in 2007, the Edward J. Bloustein School of Planning and Public Policy did prepare a concept redevelopment plan for the property. The following graphic is slide number 8 of their 39 slide PowerPoint presentation. 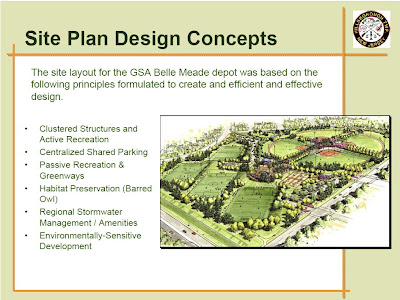 In the Bloustein plan, much of the northern parcel is used for passive recreation, meaning that all of the ball fields and other active recreation facilities can be built regardless. But wouldn't it be beneficial to have the entire 700 acres for Hillsborough?

Personally, I am hoping, even at this late stage, that some solution can be found that would allow the two properties to be joined. After all, the only thing better than a "Mega Facility" is a "Double Mega Facility". Especially one with the potential to be as amazing as this one would be.
Posted by Greg Gillette at 11:59 PM