Orchid Range, Then and Now

The Orchid Range at Duke Farms was constructed between 1899 and 1901.  The entire building was basically taken apart and put back together prior to the Duke Farms "re-opening" in 2012.

Most of you will know that Doris Duke was fascinated with orchids from a young age, and actively cultivated them during her lifetime at her estate in Hillsborough. The one named for her - Phalaenopsis Doris - is the forebear of many thousands of varieties. But the heiress is not the only woman with a local connection to have an orchid named for her.

Agnes McWilliams was born in Raritan in December 1881 into an Irish immigrant family that would eventually boast ten children. In 1899 she left the woolen mill which employed most of her family and went to work in the office of James B. Duke as an assistant to her older cousin Maggie Smith who basically ran the business of the estate. When Ms. Smith left in 1907 to take a job for one of Mr. Duke's other companies in New York, Agnes stepped ably into her shoes - her younger sister Gertrude now becoming her assistant. 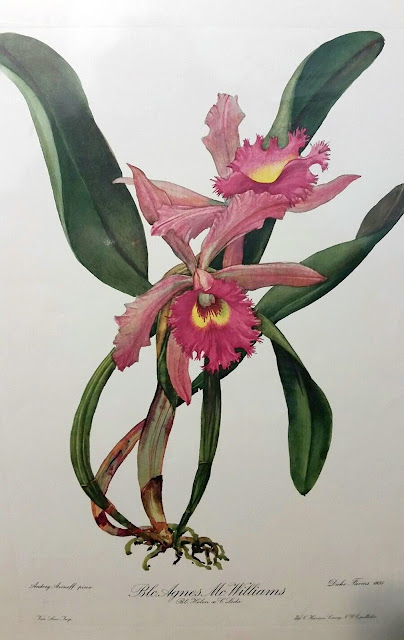 The pressures of overseeing the 2,500-acre estate which was still being constructed by hundreds of workmen were balanced by the pleasures of vacations in Europe. So well did she prosper in her role that when J.B. Duke formally incorporated the estate as Duke Farms in 1917 Agnes McWilliams was named secretary/treasurer of the enterprise - the third listed officer behind Duke who was president, and estate superintendent David Smith, vice president.

After 20 years at Duke Farms, she succumbed to a year-long illness in 1919, dying at the age of 37. In 1935 Duke Farms registered the Agnes McWilliams orchid pictured above in a print from 1960.