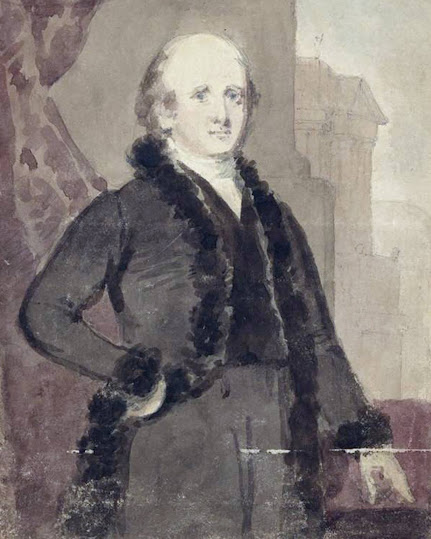 McKenzie arrived as a tramp at the door of farmer William Johnson in New Brunswick in the fall of 1887.  Exhausted from weeks and months on the road, he was nursed to health by Johnson's daughter Emma. Regaining his strength, he told a tale of having run away from Glasgow on a lark with a friend, leaving his wealthy father behind to have an adventure in America.  When their money ran out, the friend returned. But Hugh was too embarrassed to face his father, so he decided to stay and travel the country, finally winding up in New Brunswick where he learned of his father's death, and the immense inheritance he was about to receive.

You almost wouldn't blame the farmer's daughter for falling in love with the delicate young "gentleman" - if you believed any of that story was true. In the event, the couple was soon married - over the protests of neighbors, friends, concerned citizens, and the press who could find no evidence that McKenzie was in line to receive any inheritance, or had any other means of providing for his wife.

By the time McKenzie had used up what goodwill he possessed to buy a Flagtown farm on credit and start a family, his brother showed up on the scene and spilled the true story.  It seems that their father was indeed a man of means, but was in no way dead!  McKenzie had been attending college in Glasgow when his father learned he was getting into some mischief.  Among his many capers at school was the one where he posed as an American exchange student who had run out of money and cajoled classmates into buying him suits of clothes.  The elder McKenzie sent his son away to relatives in the West Indies as punishment - and it was from there that he ran away to America.

For a time, Emma Johnson made a go of it.  Working the farm, and taking care of their baby - but it wasn't long before the farm. which was never paid for, had to be returned to the seller, and Emma was back living with her father, working in neighbors' kitchens. Meanwhile, McKenzie was still bumming around New Brunswick, defrauding boarding houses and dining establishments at least through the end of 1889 when he arrested for threatening to bash his wife's brains in with their baby's rattle! 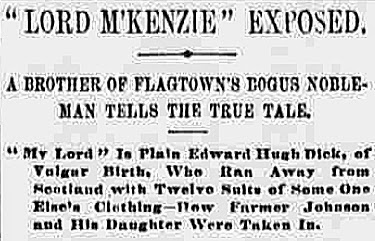 After this gruesomeness - and the charges were dismissed - the newspapers, to their credit, no longer seemed interested in "Lord" McKenzie, and so the trail grows cold.  We can only be left to come up with our own punchline for the one about Lord McKenzie of Flagtown!