Detective George Totten led the young Millstone village constable William Waller through the halls of the Somerset County lockup in Somerville, New Jersey, to the cell holding his three prisoners. "Yes you may interview them", said Totten, "perhaps you may even be able to extract a confession from the scoundrels!" What Totten was really hoping for was a confession from Waller.

The evening of September 17, 1898, was much like any other for Pennsylvania Railroad night watchman Henry Jones.  The sixty-eight-year-old father of five swept out the passenger cars stored at the East Millstone Station, readying them for the morning commute, and patrolled the grounds around the depot. As he made his rounds by the engine house, he was surprised and assaulted by four men - two of them masked - who gagged him and bound him hand and foot before carrying the elderly man off and stashing him in an empty boxcar.

The robbers headed to the ticket office where they inexpertly dynamited the safe - destroying the safe and office but failing to retrieve $300 from the safe's hidden upper compartment.  They did however get away with $100 from the safe, along with a silver watch and two five-dollar bills from Jones, who was discovered by commuters at six a.m. the next morning.

Townspeople immediately pointed their collective finger at Tom Wright, the local "town terror" who was suspected in a recent burglary of the coal office.  He was soon found to be in possession of a silver watch engraved "Henry Jones".  Wright's friend, Jerry Washington, declared that he had "found" the night watchman's ticket office key just lying on the ground.  Both were soon picked up by Totten, as was their usual accomplice Tom Shine.  Getting Waller was a little trickier. 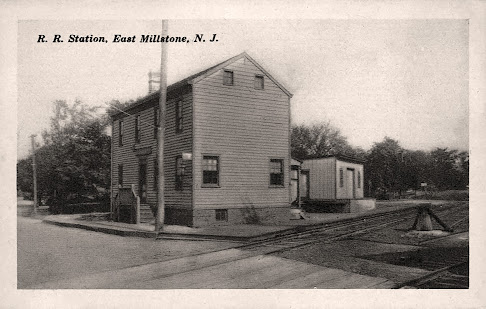 Waller had come to Millstone about a year earlier, opening a bottling works.  His appearance in the village coincided with the beginning of a number of burglaries and safe crackings. As unlikely as it sounds, he was also able to get himself elected constable of the village. Before coming to Millstone, he had been the Lehigh Valley Railroad yardmaster at Port Reading, near Bound Brook. During his time there, the railroad experienced a rash of freight car break-ins and robberies - which ceased after his departure.
Totten knew all of this, and also knew Waller was friends with the three men in his jail - a fact Waller readily admitted, whispering to the detective as they approached the cell, "These men have been around my place, and I think I can worm a confession out of them."

As it turns out, he should have maintained the whisper.  Totten was able to easily overhear the conversation of the four and was convinced that Waller was the ringleader of the group. He immediately arrested the young man, placing him with the other three.

Henry Jones died just a few days later, possibly from the injuries he received during the robbery, and it was anticipated that Waller and the other three might be charged with murder. As it turned out, this was one of Detective Totten's few swings and misses in his long career. Waller was able to prove an uncontestable alibi - and was acquitted on October 25, 1898. Wright and Shine, who had also been charged, were found guilty of burglary.
Posted by Greg Gillette at 3:57 PM