Somerville is one of Central New Jersey's great original suburban towns. Beginning in the last quarter of the 19th century right up through the middle of the 20th, the Somerset County boro was promoted as ideal for the New York commuter. 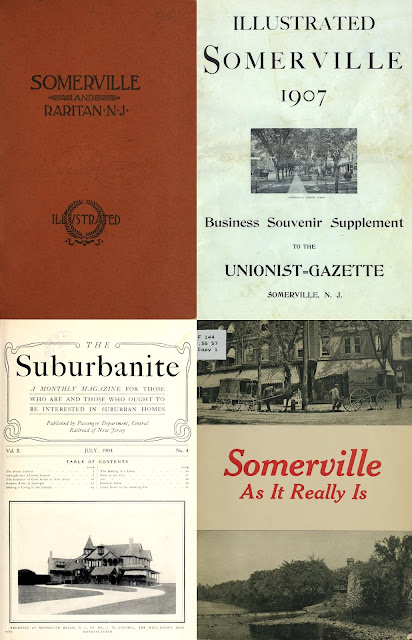 Besides feature stories in the daily and weekly newspapers, four publications sought to increase the migration of  "city folk" to Somerville. These were the booklets "The Towns of Somerville and Raritan, Illustrated" (1891) and "Somerville As It Really Is" (1909); the newspaper supplement "Illustrated Somerville" (1907), and the monthly publication "The Suburbanite" (1903-1913).


Articles extolling the virtues of suburban living featured alongside photos of the streets and homes (and churches, schools, and businesses) that one could expect to find in Somerville. Please enjoy this look at residential Somerville from more than a century ago, first from the booklet "Towns of Somerville and Raritan" which focused on the newly opened Altamont Place.


In 1907 the Unionist Gazette published a "Business Souvenir Supplement" titled "Illustrated Somerville". Some of the photos therein were reprints of houses pictured in the 1891 "Towns of Somerville and Raritan", but many appeared for the first time.


"Somerville As It Really Is" contributes two photos of suburban Somerville to our collection. We wonder what influence W J Kirby had with the publishers for his house to be the only private residence featured!


"The Suburbanite" was published monthly from 1903 to 1913 by the Central Railroad of New Jersey. One of their obvious goals was to encourage development in the towns along their main and branch lines by featuring the joys of suburban living in Westfield, Plainfield, Bound Brook, and Somerville, among others. The country along the Flemington Branch (South Branch) through Hillsborough and Branchburg even got a few mentions over the years. Here are the streets and homes photographed for "The Suburbanite".

Posted by Greg Gillette at 2:33 PM

Email ThisBlogThis!Share to TwitterShare to FacebookShare to Pinterest
Labels: Somerville