The year was 1926 and the Girls Scouts of New Brunswick had a problem. Summer was fast approaching, and they had yet to secure a suitable location for their annual camp season. For years they had been a somewhat itinerant troop - moving one from one undesirable campground to another. Whether it was being flooded out by the Millstone River at Rocky Hill, or being overcome by mosquitos at Silver Lake in Mountainside, they vowed that 1926 would be different. 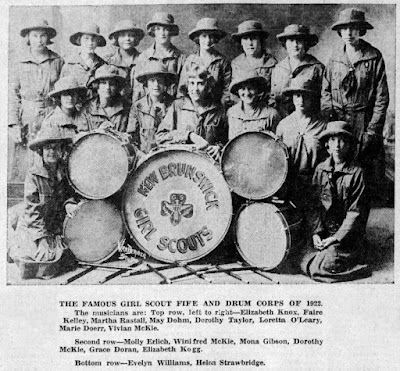 Troop leaders began traveling the backroads of Middlesex and Somerset Counties asking country store proprietors if they knew any good spots for girls to camp - particularly with a good old-fashioned swimming hole nearby. In Neshanic, they were told of a spot just down Montgomery Road at the site of the old covered bridge across the Neshanic River. It was perfect!


Miss Louise Peterson was brought in from Estherville, Iowa to lead the camp program. Sleeping tents were pitched at the top of a small hill, with the kitchen and dining tents in the meadow below - a field full of pink azaleas, Quaker ladies, and large moss violets. Altogether the camp comprised about 12 acres with 400 feet of river frontage. They named their camp "Meiken" - an Indian word meaning "scout".


The successful first year encouraged the Scout leadership to buy the property outright from local farmer Chris Knudsen and to also engage the Danish immigrant in the construction of a permanent cabin for the camp. This he did with such skill that the building - with a living room and fireplace on one end, a kitchen with pantry on the other, and a long porch across the front - stood for decades despite years of flooding and the wear and tear from thousands of girls.


A typical two to four-week campout during those first years would include plenty of games and arts and crafts - especially basket-making - as well as swimming in the Neshanic River. Older girls might also go on a canoe expedition on the Neshanic - camping out in the woods after a day of paddling and enjoying nature. Parents were told not to worry since in those days the Neshanic was still navigable by canoe or small boat while also being quite shallow.

Besides hikes and canoeing along the river, the scouts - typically 40 in number - would also hike the trails up the Sourland Mountain. Evening activities might include singing and also dressing up - Pirate Night was a big hit! At all times the girls were fed the freshest local NJ foods including, as reported by the New Brunswick Home News, "milk from Guernsey cows from a nearby pasture, fresh eggs from the adjoining farm, and plenty of fresh green vegetables."


The New Brunswick Girl Scouts continued to make active use of the Camp Meiken throughout the 1930s. Then the course of the river changed and swimming - so important then as now to the Scout Camp experience - was no longer feasible. The camp then became a mecca for shorter excursions of about four days. With the water from the deep artesian well still coming up pure and cold and the main building still functional, girls were able to enjoy a few days in the country each summer.