In 1925, four-year-old John W. Kalpin, Jr. moved to Hillsborough with his Russian immigrant parents and grandparents, one sister, and two brothers. The family had a farm of 55 acres on New Amwell Road between Auten and Triangle (South Triangle). Three more children soon followed, but the death of John Kalpin, Sr. early in the next decade forced John to leave school at the age of 15 to help support the family. 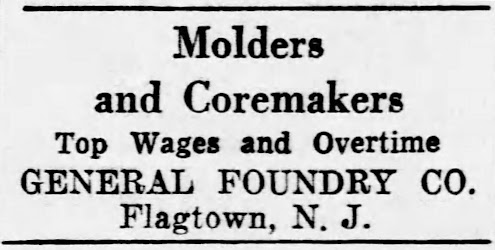 Kalpin served a three-year apprenticeship in the foundry trade, and in 1939 went to work for the Bendix Aviation Corporation. Within five years he was the assistant superintendent with responsibility for 400 employees. It was 1944 and he was just 23 years old.

In May of that year, he began a two-year stint in the army, spending 18 months in Europe during World War II receiving the Bronze Star. Upon returning stateside, Kalpin had an idea to start his own foundry in his hometown of Hillsborough. In 1947 he purchased a 7-acre tract in Flagtown on Clawson Avenue between the Lehigh Valley and Jersey Central railroads.

After six months of construction - which included the main 40 x 100 foot concrete block main building - the foundry began operations in January 1948. The company was mainly engaged in producing machine parts from gray iron - the most common form of cast iron so named because of its graphite content. Parts as small as a few ounces and as much as several tons were produced at the plant. To manufacture a cast iron machine part, first a model, generally of wood, would be made of the part that needed to be reproduced. From this, molds and cores are made using hardened sand that can withstand molten metal of approximately 2700 degrees.
General Foundry operated without incident until 1965 when the state Department of Health reported that their smokestack was "emitting more solid particles into the atmosphere than allowable under state air pollution regulations." This was a problem that would vex the company for the better part of the next two decades, although in later years the DEP did not consider the emissions to be much of a problem since the smokestack was only operational about 90 minutes a day.

On February 15, 1977, a devastating fire tore through the plant causing $600,000 in damage. One hundred firefighters were on the scene in freezing conditions battling the blaze that gave off an orange glow that could be seen for miles. Flagtown Fire Chief Greg Kane explained how his men chopped through a thick layer of ice to drop their hoses into the company's pond in order to pump water - all other water sources were frozen.
An extremely disheartened John Kalpin showed up at the scene from his home in Belle Mead and told reporters, "It's a shame, a real shame! I'm not going to rebuild. This is it." He was most concerned with the possible loss of the patterns and molds used in the castings. As it turns out, firefighters were able to save the nearby residences, the administration building, and enough of the nearly irreplaceable patterns and molds to allow Kalpin to reopen the foundry.
In April 1984 disaster struck again as an explosion ripped through part of the plant blowing out windows, walls, and moving the foundation. It was fortunate that the blast occurred during a shift change and only two employees were injured.
General Foundry recovered from the 1984 explosion and continued to operate in Flagtown for another decade and a half. Today the site is the home of Kyle Conti Construction.
Posted by Greg Gillette at 2:36 PM