In 1936 a unique children's summer camp opened on the Sourland Mountain. Although only operating for a few years, Rainbow's End Camp was an important institution - not just for what it was but also for who it was associated with. Yet almost nothing is remembered about the camp today.

In the mid-1930s, New York City residents C. Benjamin and Alma Curley bought a summer home on Montgomery Road near Zion. They soon decided to build a camp on the property. The Courier News reported about it on August 25, 1936:

"Atop Neshanic Mountian to the south of here has been established the first summer camp for Negroes in Northern Jersey. It is along the Zion-Montgomery Road and is known as "Rainbow's End." The place is operated by Mrs. A. C. Curly [sic] of New York City. One large dormitory building has been constructed with individual bedrooms on the first floor and a large sleeping room on the second. Mrs. Curly [sic] plans to erect another building before next summer."

This one brief paragraph contains practically the sum of what we know about Rainbow's End today.  Other newspaper mentions in the 1930s concern a New York African-American Women's club The Gothamettes having a family outing at the camp in 1939, and Alma Curley's big birthday party there in 1938. No information is ever given about who the Curleys were and how these New Yorkers came to Hillsborough. As we will see in a future article, Rainbow's End was not their final connection to Hillsborough history. 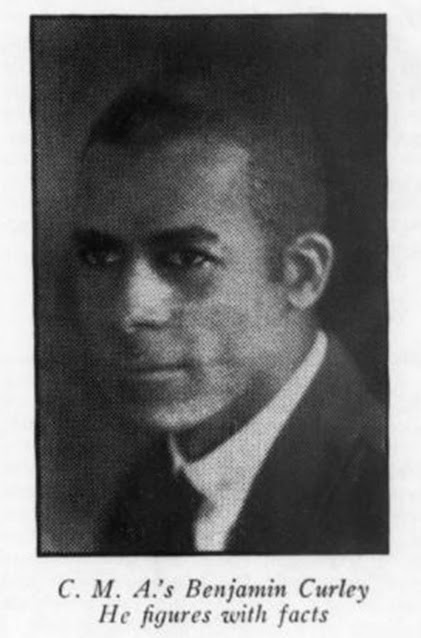 Clarence Benjamin Curley was born in 1889 in Memphis, Tennessee. This remarkable man graduated cum laude from Howard University in 1911 majoring in business. While studying law at night he worked at the treasurer's office of the university. He married Alma Duncan on the night that she graduated from Howard.
C. Benjamin Curley - which was the name he went by for the rest of his life - decided he was more interested in business than law. so despite finishing his law degree in 1914 went back to Howard in 1916 as a professor of commercial arithmetic. He was commissioned as a First Lieutenant at the outset of World War One and did so well as a clerk with the 368th infantry that by the time he got overseas he was promoted to assistant disbursing officer at 92nd division headquarters - the only African American disbursing officer in the entire 92nd division.
After the war, he went to New York and graduated from NYU's graduate school of Business Administration in 1923. After that, he embarked on a series of successful business ventures - Harlem's largest five and dime store, a printing shop, a cafeteria/lunchroom, and the first African American illustrated newspaper in the US.
It is often said that the business of America is business. Mr. Curley agreed from a uniquely African American perspective. By the 1920s he started The Curley Business Service, an organization devoted to helping black businesses with their organization and administration.
He had some interesting ideas, including that the church could and should play a larger role in business. But his overarching view was that with guidance and support "Negro businesses" would become "businesses".
In 1930 Mr. Curley founded the People's Credit Union of New York - an organization that helped countless individuals and businesses in Harlem with loans as little as $150. He was also greatly involved with the Colored Merchants' Association founded by Montogomery, Alabama grocer A.C. Brown in 1928. The CMA was a national cooperative of black-owned businesses that promoted cooperative purchasing, advertising, and selling.
C. Benjamin Curley had many other ventures, but always maintained his commitment to helping the African American businessman. Perhaps his intentions can best be summed up by a verse of a hymn that he wrote for his fraternity at Howard, Alpha Phi Alpha:
"As we move through time and space,
Let us all real brothers be
Pressing on to one great goal;
Help the needy and deserved,
And uplift the common whole."
As noted above, Mr. Curley makes another appearance in Hillsborough history 25 years after the Rainbow's End Camp. Look for that in a future article.
Posted by Greg Gillette at 2:38 PM