New Jersey celebrates Arbor Day on the last Friday in April - which happened to be today! I got a jump on the holiday by planting a small tree earlier in the week. We chose a crabapple tree to replace the Bradford Pear that we removed about a year and a half ago.

We loved the pear, but it had a number of problems. First, it was a builder's tree that was too close to our house. Actually, it used to be our neighbor's tree before we had our house built and a new property survey was done, and it was found to be on our property! It was perfect as their tree, not so great as ours. especially since the builder ended up planting another Bradford Pear just a few feet away from the first one, to compensate our neighbor for the tree that wasn't theirs!

Both trees lost limbs over the years, as these pears tend to do, and both were leaning way over toward our house

Here is a picture from April 2003. This was taken about a week before I had surgery on my back - you may notice that I'm leaning more than the tree is! 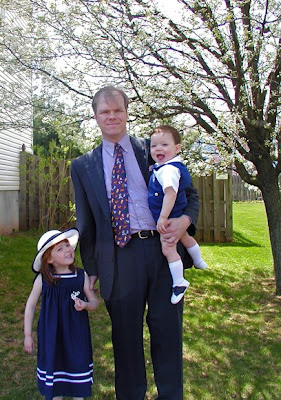 There's an old adage that says never plant a $50 tree in a 50¢ hole. They always tell you to make the hole two or three times wider than the root ball. I don't buy it.

A few years ago I read that putting a tree in a large hole only encourages the roots to grow around in spirals inside the space of the hole, and never go beyond into the rest of the soil. The theory is that roots seek the path of least resistance, and don't venture out of the soil/peat moss mix that you use to fill the hole unless they really have to - especially when the soil is hard clay like we have in Hillsborough. Researchers have tested this theory by digging up trees after two, three and four years. 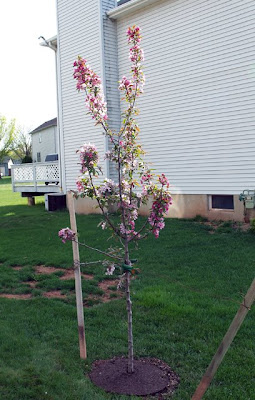