This is a picture of my grandfather, Ernest W. Gillette. I never knew him. 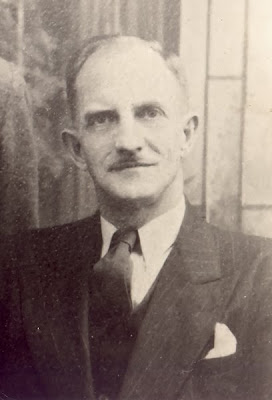 My dad rarely, if ever, spoke about his father. In fact, the first time I remember him speaking at any length about my grandfather was when my grandmother passed away in 1993. It was then that he told me the circumstances of his father's death.

My dad and my grandfather were at a late summer baseball game. The year was 1948 - my dad was not quite 17 years old, but had graduated from high school that June. My grandfather, who suffered from heart disease, had a heart attack while watching the game - and passed away shortly thereafter. He was 53 years old.

I was reminded of this when I sat beside my father's hospital bed watching TV the first week of April, 2002. We were watching a baseball game and talking about what kind of season the Mets were going to have. My dad had made the decision that morning to forgo any further treatment for multiple myeloma - a cancer that was only diagnosed just 2 months earlier.

I told my dad that I felt fortunate, lucky to have had him in my life for 38 years - since he only had is own dad for such a short time.

My dad, the bravest man I ever met, facing his imminent death, comforted me as my tears began to well up - and said, as only my father could "Greg, there's nothing lucky about this".