I want to thank all of the people who gave up a part of their gorgeous Saturday afternoon to come to the municipal complex and share their historic photos and memories as part of the Hillsborough historic mural project. In the short time I was there, I saw some great old photos - including the original Belle Mead train station and the Mercer & Somerset Railroad Hillsborough station.

I also viewed a small mock-up of how the finished mural might look - complete with representations of Hillsborough's historic houses, churches, and people!

But one person conspicuously missing was our town's namesake - Lord Hillsborough himself! 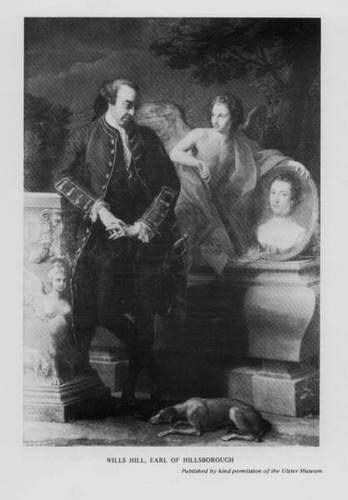 Born as Wills Hill in Gloucestershire, England in 1718, he became a member of parliament in 1741, and a member of the Irish parliament in 1742. He was created Earl of Hillsborough in 1751. He held several positions in the British government before being named Secretary of State of the American Colonies in 1768.

Counties in Florida and New Hampshire were named for Lord Hillsborough. And in 1771, our newly formed township was named in his honor.

Today, of course, we consider Lord Hillsborough to have been on the wrong side of the Revolution. Yet, 237 years later, the name still seems to fit - and it would be fitting to have old Wills up on the facade of our municipal complex - don't you think?
Posted by Greg Gillette at 10:43 PM