This Raider is a Star

Our local athletes have had their ups and downs this Fall season, but at least one "Raider" has been a shining star for nearly a year. I'm talking about Raider, the Hillsborough Township Police Department's K-9 officer. 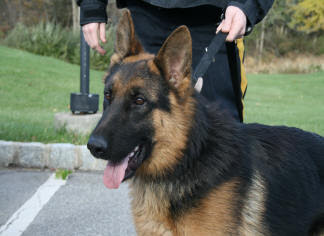 Raider, a 16-month-old male from Hungary, has already assisted in narcotics busts and other patrol operations, and has lent his nose to missing persons searches.

Like most real stars, Raider's reputation is growing. I've heard that the mere sight of the "K-9" insignia on handler Chris Engelhardt's vehicle after a traffic stop is enough to make the bad guys roll over and play dead, or at least sit up and beg - for mercy!
Posted by Greg Gillette at 2:50 PM