Messrs. Cinque, Townsend, and Dempsey, engineer, fireman, and brakeman of  Jersey Central Railroad train number 697 were busy trying to make out the signals in the dense fog between Bound Brook and Belle Mead on the evening of October 2, 1950. Conley, the conductor, and Crane, the flagman, were riding in the caboose behind 95 fully loaded freight cars headed to Philadelphia. As they rolled past Manville on track 1 at 10:35 and Weston at 10:38, conditions were clearly worsening. 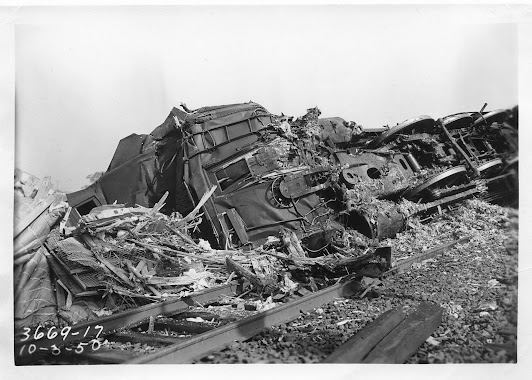 About a mile east of the Belle Mead tower, Cinque urged the engine forward past signal 142a and began to look keenly for the next signal at the interlocking near the station. Townsend, too, searched in vain, and then Dempsey applied the brakes. 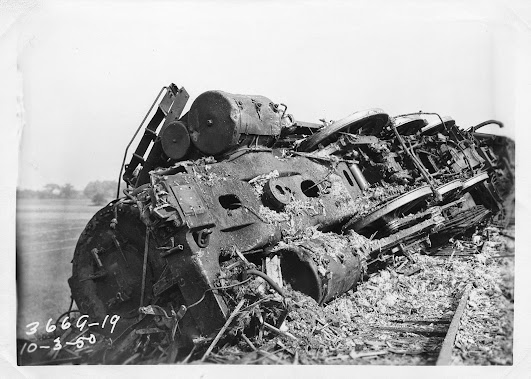 As soon as he felt the brakes, Crane threw a flare from the back of the caboose, and then jumped off, flag in hand, to protect the rear of the train.  The train was stopped while the gentlemen in the engine tried to see the signal that would allow them to move. 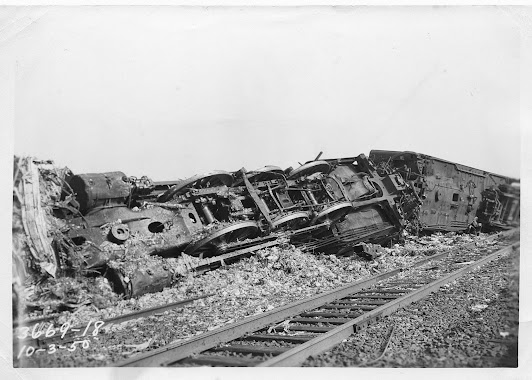 After 8 minutes the engineer recalled Crane, indicating he was ready to proceed. The flagman threw another caution flare, then hopped back aboard as the train increased speed. 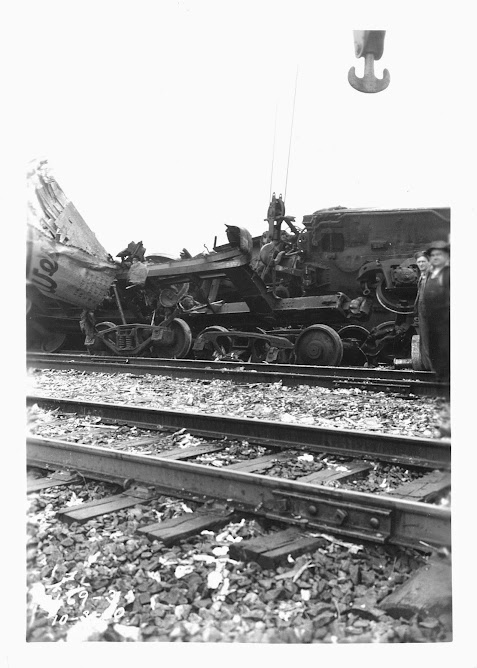 After moving a few car lengths at a speed of about 12 mph, engineer Cinque was able to see the medium-clear signal indicating that, according to Reading's incident report, "the track was lined for movement of train from track no. 1 to track no. 3." 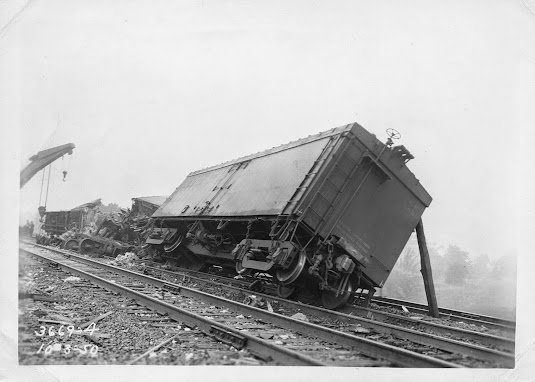 It was at that moment that conductor Conley and flagman Crane observed Reading train number 29 approaching fast from the rear. 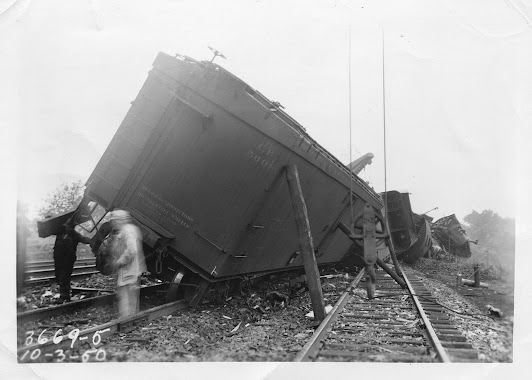 Conley and Crane dove from the caboose just before impact, as had engineer W.R. Davis and fireman J.R. Byrne from the Reading engine moments after seeing the red flare and applying emergency braking. 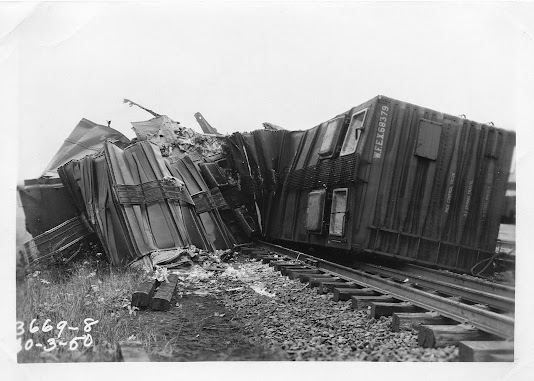 It wasn't enough to stop the speeding Reading train, "deadheading" back to Philadelphia with just one passenger and one baggage car at 50 mph. 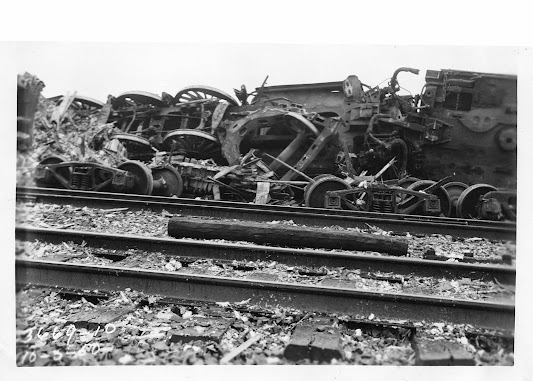 As you can see from the photos taken the next morning (from my personal collection), the impact was terrific. The CNJ caboose was completely destroyed, as were the two refrigerated cars just in front. 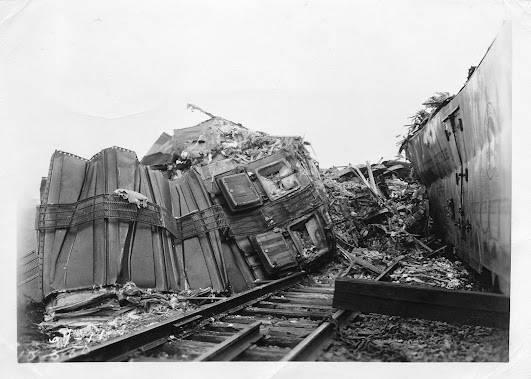 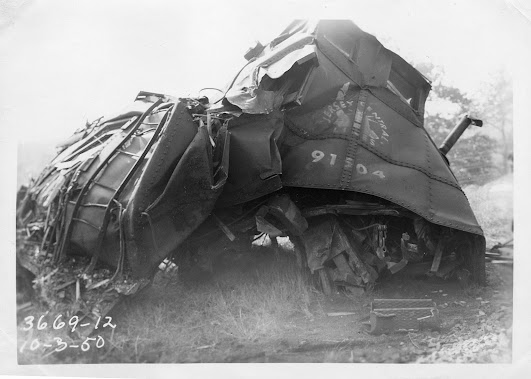 The injured railroad employees were taken to Somerset Hospital in Somerville - amazingly the injuries were only minor. 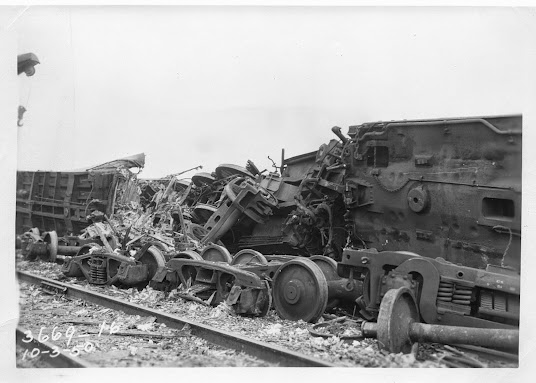 Everything was put to rights within days of the accident. In fact, by virtue of the collision taking place in an area served by four sets of tracks, commuter service to New York and Philadelphia was able to resume the next morning utilizing track number 4 only. According to the Hopewell Herald, the contents of the two refrigerated cars in the rear were scattered across the tracks. If you've read this far, take a guess what was in those cars.  It's a common item found in the produce aisle. Leave a message here or on the Gillette on Hillsborough Facebook page. 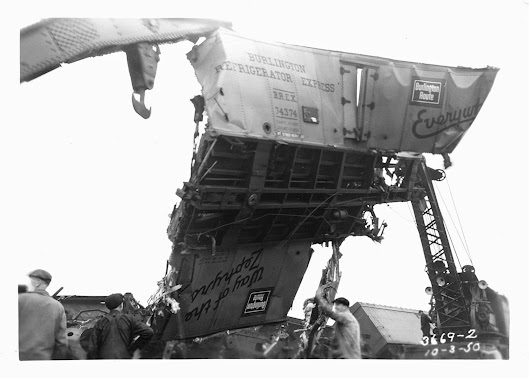 Posted by Greg Gillette at 8:59 PM