Could this be the end of New Jersey's 7th Congressional District? According to a recent article in the Courier News, our state's slow population growth over the last decade could mean a loss of one congressional seat after the 2010 census. It just could be number seven!

New Jersey at one time had as many as fifteen seats in congress, but lost one after the 1980 census, and another after the 1990 census as population growth boomed in the "sunbelt" and slowed in the northeast. Now the decade long exodus of New Jersey residents - 377,000 lost to out-of-state migration - may mean that our thirteen congressmen could be reduced to twelve.

Our 435 United States Representatives are apportioned by Congress, but the congressional districts are drawn by the state legislatures. The 7th district, a traditionally Republican territory, meanders from Hunterdon to Union Counties, and borders more districts - six - than any other district. It's easy to see how a Democratic state legislature and Democratic governor would carve up the 7th, with the western and central parts of the district being joined to the 5th and 11th districts, while the eastern portion is gobbled up by the 6th, 10th, 12th, and 13th.

Take a look at the map below to see what I mean. 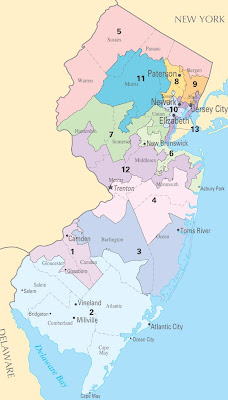 Subtle boundary shifts would also have to be made, to keep populations fairly even, and the districts would have to be renumbered from 1 to 12, but the 7th as we know it may be finished!

Of course the re-districting would not go into effect until 2013 - just in time for Leonard Lance's third term!
Posted by Greg Gillette at 10:47 PM