Approximately 800 area residents made their way to the Jersey Central Railroad passenger station in Somerville late on the night of Friday, July 23, 1915 - hoping to be scared out of their wits!


They came looking for the ghost that had been seen and heard scampering about the large railroad yard between the station and the cemetery. For about a week, hideous shrieks had been heard in and around the lines of freight cars and the big roundhouse. On Thursday night, twenty-five brave souls accompanied by policeman Joseph Hanlon camped out until daybreak near the station to investigate the strange goings-on. Their affirmative report of "mysterious noises [that] came and ended at frequent intervals" is what brought the crowd out on Friday.


Thomas Hagan, the rail yard night watchman, was the first to hear the piercing cries and the first to see the human-like figure flitting in the shadows earlier in the week. At first, Hagan was laughed at - but then residents of Somerville began to hear the eerie cries. Cries so loud and evil that they were unable to sleep.


Borough residents began sitting up at night, leaving their lights on, listening for the ghastly yells - which now seemed to be coming from the graveyard. Hagan and three other railroad employees finally had enough and abruptly quit - unable to stand the strain of working while a ghost was lurking. 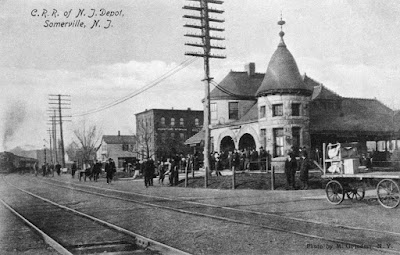 Now 800 of Somerville's bravest citizens, aided by the Chief of Police, his officers, and seven railroad detectives were determined to catch the ghost at last - and put an end to their nightly terror.

Alas, it was not to be. Sometime after midnight, strange sounds were heard, but could not be located - and the apparition failed to appear. The crowd dispersed - some relieved, some disappointed. And the Somerville Spook was never heard from again.
Posted by Greg Gillette at 11:59 PM