Like many Central New Jersey communities, Flemington is seeking restoration of passenger rail service. Hillsborough is already on board with plans for the reactivation of the CSX West Trenton Line - a project that is at least 10 to 20 years in our future - but Flemington's plan should also be intriguing for Hillsborough residents and officials, because 7 miles of the 18 mile line between Flemington and Bound Brook would run through our town. There would be more track in Hillsborough than in any other community along the line!

Flemington last saw passenger service along this corridor on April 25, 1953 when Jersey Central's No. 1555, nicknamed "Old Friendly" made its final run on the South Branch Railroad between Flemington and Somerville. The photo below is from the station stop at Neshanic Station that day. 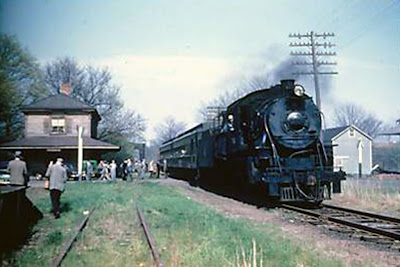 The section of those tracks between Three Bridges and Somerville was torn up years ago, and the proposed route wouldn't use that exact alignment, but would use the existing Norfolk Southern Lehigh Valley Line which closely parallels the old Jersey Central route.

This line also had passenger service a century ago, with stops in Hillsborough at Flagtown and at Royce Valley, where the railroad crosses the present day Route 206.

What do you think? Should Hillsborough endorse restoration of passenger service along this corridor? How about turning Flagtown into a "transit village", or building a commuter rail station at Docherty Park?

If the West Trenton Line is expected to take another 10 to 20 years, this plan will take about 20 to 30. Still, it will never happen if we don't plan for it now!
Posted by Greg Gillette at 11:59 PM