If you were to flip through my high school yearbook, you would be able to draw only one conclusion from reading the comments left by my friends. You would never figure out that I was a varsity athlete, or was the editor of the literary magazine, or had the second highest SAT scores in my graduating class. All you would be able to conclude is that I was the Class Clown. 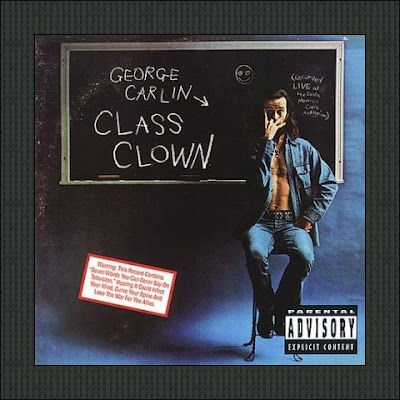 The death of comedian George Carlin reminded me of the first time I heard the album "Class Clown", and especially the routine "The Seven Words You Can't Say on Television".

These days I am involved with the charity organization Autism Speaks. But back in the 70s, everybody was raising money for the Muscular Dystrophy Association. Even kids.

The big thing was to hold a kind of backyard carnival - raise money in the form of nickels, dimes, and quarters from all of your neighborhood friends - by selling lemonade and cupcakes, setting up silly games of chance, or even charging admission to a homemade haunted house.

One of my friends had a better idea. He got a hold of his mom's record player (remember those!), and his older brother's LP collection, and charged all of us ten-year-olds 50 cents apiece to listen to "Class Clown" in his dad's garage. I remember you had to give up your two quarters and be sworn to secrecy before the garage door was pulled down behind you. I believe the last cut on the album was the "seven dirty words", and to a ten-year-old, that was definitely worth the price of admission.

Oh, I almost forgot - a peek at one of his brother's Playboys was another quarter! Hey, anything for a good cause!
Posted by Greg Gillette at 11:59 PM