Own it all at Brookside Square

Welcome to Hillsborough's Brookside Square, circa 1976, where the dreams of home ownership all come true. 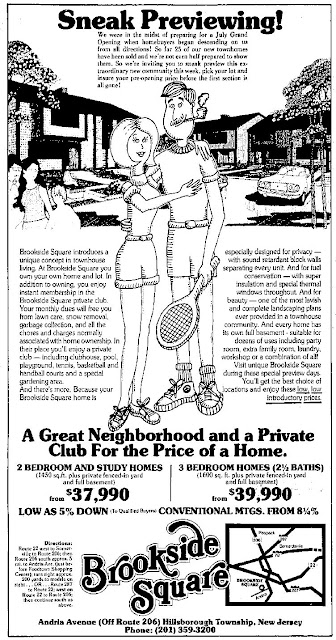 Own your townhouse. Own your lot. Own your membership in the private club. Own your full basement "suitable for dozens of uses". All for the low, low price of $37,990.

Put that in your pipe and smoke it!
Posted by Greg Gillette at 10:15 AM No comments:

I imagine one of the most frustrating aspects of working in local government is the inability to provide residents with the instant results they deserve - and that you would like to give.  Often, an elected official is given little or no grace period before he hears the cry of "broken promises!"  Go a little beyond that, and the conspiracy theorists begin their insinuations that the work was never intended to be done - or worse.


The fact is that some things take time. 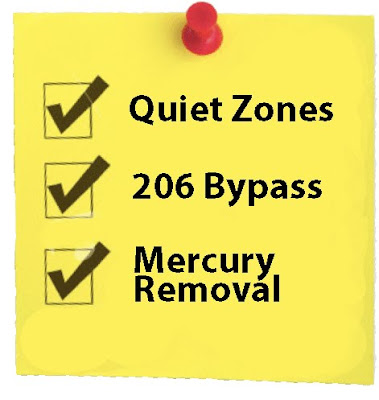 Establishing railroad "quiet zones" at the Norfolk Southern crossings required much more than money.  Navigating the bureaucracy of the Federal Railway Administration took time.  And the payoff, notwithstanding a few stray horns this past week due to signalling issues, has been worth it - at least to my ears.

The concept of a new limited access highway through Hillsborough probably goes back more than 50 years to the initial construction of Interstate 95.  This "Somerset Freeway" took many forms over the decades, until finally being scuttled in the 80s.  Renewed plans for a 206 bypass have been around for more than ten years.  Interesting to realize that the first shovels went in the ground the same month that the missing link of Route 95 has at last been mapped out.

Hillsborough's "mercury problem" has also been around for decades, but it wasn't until 2001 that our township committee became aware, inadvertently, that most of the nation's stockpile was being stored in our backyard.  Hillsborough officials not only navigated the usual Washington bureaucracy, but also had to deal with the trepidations of the stockpiles new home.  The announcement by Hillsborough mayor Frank DelCore that one-fifth of the mercury was trucked to Nevada earlier this month, and the rest will be going soon, should come as no surprise to those who knew that this issue was much more than a perpetual campaign promise - it was actually a top priority.

On November 7, 2006, the village of Toms River swallowed Dover Township.  That was the day township voters approved a measure to change the name of their municipality from "The Township of Dover" to "Toms River Township".  Already generally known as Toms River by the public - and the Post Office - the change made sense.

Nearly 100 years ago, the village of Manville may have been on the verge of gobbling up Hillsborough.  Even though Manville didn't exist as an actual municipality until its separation from Hillsborough in 1929, the Boro was known as Manville right from the start.

Look at this newspaper ad from October of 1912.  This was before the Johns-Manville plant was even finished building. 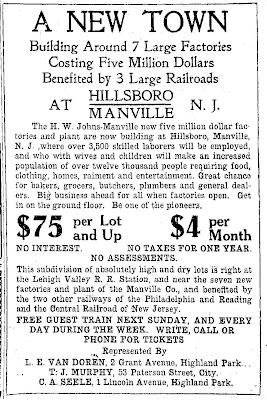 At least Hillsborough, or "Hillsboro", gets top billing.
More telling is this newspaper story from the October 26, 1912 edition of the New Brunswick Times:

Terence P. Murphy, of this city, who is connected with the Brooks & Brooks Corporation of New York, which is developing the land at Manville, Somerset county, has arranged to take a number of people from this city to that place tomorrow, who are going there to look over lots. The car will leave this city tomorrow afternoon at 1.08 o'clock. At Bound Brook there will be a special train on the Lehigh Valley to run from that place to Manville. Tickets have been furnished to all those who are going to make the trip.  There have been factories recently erected at Manville at a cost of $8,000,000 and employing  3,500 people. Manville was formerly known as Hillsboro.

Check out the last sentence.

How do you think this played out with Hillsborough's farmers and villagers?  Was "Hillsborough" nearly wiped off the map?  Brooks & Brooks, who no doubt penned this press release-type story for the newspaper, obviously preferred their new name.  And I am sure Johns-Manville would have had no objection to the change either.
Posted by Greg Gillette at 1:59 PM 2 comments: 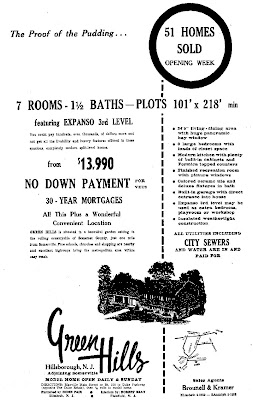 I'm all over the Expanso.
Posted by Greg Gillette at 2:31 PM No comments: 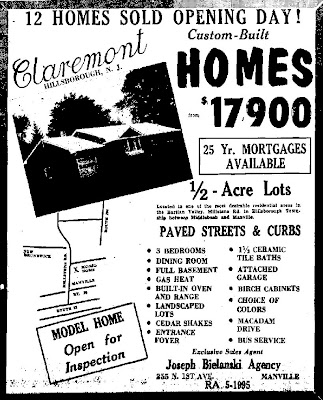