When heiress Doris Duke presented plans to construct a massive piggery on her Hillsborough, NJ estate in 1950 township residents and officials were suddenly confronted with an issue that they thought had been put out to pasture a decade before.

It was in September 1938 that Henry Krajewski and family purchased farm property on Amwell Road in the Woods Tavern area east of today's Route 206.  The first red flag should have gone up when neighbors learned that the twenty-six-year-old was from Secaucus - New Jersey's pig capital during the first half of the 20th century.

Hillsborough farmers had always raised pigs, but no one had ever contemplated an operation of the size soon endeavored upon by Krajewski. By March of 1939, the piggery was already 400 strong, with plans to grow to 4,000. It wasn't the actual pigs that so distressed Hillsborough residents, but rather the smell of the refuse they fed on and the generally unsanitary conditions of the farm.


Hillsborough's most recent sanitary code dated from 1907 and was wholly inadequate to deal with large-scale pig farms. A new ordinance was quickly passed requiring those who wished to keep more than 50 hogs to obtain a $10 permit and submit to inspections by the Board of Health. In short order, Krajewski was issued several fines which he refused to pay. When a second large piggery opened on Amwell Road that summer, and then a third, piggeries were thrust to the forefront as an issue during the campaign for township committee.

J. Irving Stryker of South Branch, the Republican challenger against incumbent Democrat committeeman J.V.D. Drake, pledged that "Undesirable enterprises such as piggeries, where thousands of swine are fed on garbage under filthy conditions, must not be permitted." Other campaign issues check the usual boxes - rateables and road conditions.

In March 1940 the New Jersey Supreme Court upheld a Hillsborough ordinance, challenged by Krajewski, forbidding the dumping of garbage in the town. The next month, Krajewski announced that he was ceasing operations and moving back to the pig-friendly environs of Secaucus. Two other piggeries in Hillsborough closed at the same time.

New Jersey and the nation would hear a lot more from Henry Krajewski in the coming decades! 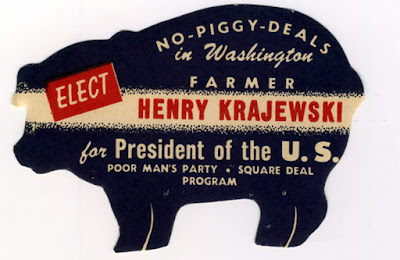