Somerville Lion on the Loose, 1921

Lion, tiger, polecat, leopard. panther - or whale?!?!? Something was terrorizing Somerville's East-Enders in the summer of 1921, though no one was quite sure what it could be.  When the beast began showing itself in the evenings in the vicinity of Peter's Brook, townsfolk who were caught unawares fled in panic at the sight, later recalling that a few months previous a Barnum & Bailey animal trainer had been scouring the wooded areas about the town on a mission for which he would not answer. Now it was supposed that a lion had escaped from a passing circus train, and had not been retrieved.


Here's what Mrs. Henry Stenger told the New York Evening Telegram about the encounter she and her four-year-old daughter had with the animal:

"Beatrice and I were walking by the bridge [over Peter's Brook]. The trees along the water's edge form a rather thick screen, but the clear water, reflecting the moonlight, makes it fairly easy to distinguish objects. As I was glancing casually along the bridge. I saw a large animal bound out of the darkness, jump over a hedge at least three and a half feet high, and disappear in the shrubbery by the brook. Beatrice screamed when she saw it, and no ordinary dog would have caused her to do so. The animal, I feel confident, was not a dog. It resembles a lion, for its head seemed large for its body and it had a bushy tail."

Despite the fact that she did not hear it roar, Mrs. Stenger vowed to not let her child out after dark until the beast was caught.

Mr. Stenger quickly roused the Cline brothers, Sam Hall, the Hoffman brothers, and others into a sort of posse, but came up empty. "We found nothing", he said, "but naturally such a creature would not wait around to be hunted."

Sightings continued for the next two weeks. Edward Fialka who lived on Davenport St. saw the lion on his way home from work one evening, and his two young daughters also reported seeing "a big animal." Even the Brokaws, who were said to have "an excellent reputation for conservatism and common sense" were confident that they had seen something.

The most famous eyewitness was none other than millionaire entrepreneur James B. Duke, who just missed bagging the trophy as he had to dash back to the house for his rifle. How the lion was able to cross the Raritan unobserved, either by water or one of the few bridges, remains a mystery. 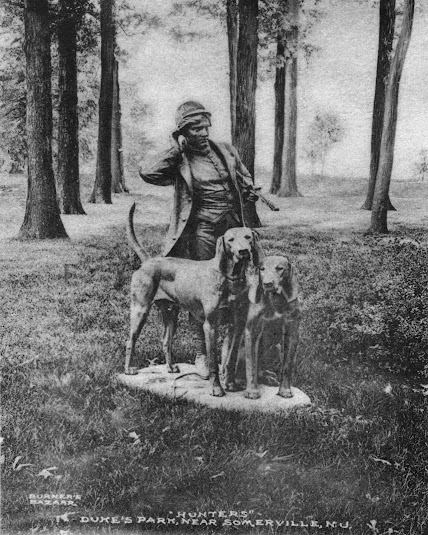 In any case, Somerville police chief Lewis Bellis was not buying any of it. "These persons, I have no doubt, are sincere, but they are impressionable. At night almost any animal appearing suddenly may frighten one - even your own pet cat."

The chief's theory was that the "lion" was in actuality a giant mastiff named Nero - well known to the East End neighborhoods, but perhaps a bit scarier after dark.

It can be supposed that Chief Bellis was attempting to create an impression of his own - and since the newspapers appear to be silent on the subject after his pronouncements, we can assume that this did the trick, and everyone soon had a good laugh about the weeks they were terrorized by the lion, polecat, leopard, panther, and whale!

Posted by Greg Gillette at 2:50 PM No comments:

If there is one thing that we should take away from Friday's terrorist attacks in Paris, it is that we have no solutions. Attacks will continue until we find one. Don't despair - the problem will be solved in time if we ask the right questions.

Conservatives have universally called for President Obama to name the enemy as "radical Islam". He has insisted on using the term "violent extremism". President Obama is correct, but not for the reasons he thinks.

What most of the world today refers to as "radical Islam" is not radical at all. By definition, because they adhere most strictly to the tenets prescribed in the Koran and other ancient holy texts, they should properly be described as orthodox, not radical. The real Islamic radicals are the reformers who we call moderates.

It is important to make this distinction because it will ultimately lead us to the solution.

Many have suggested that the answer lies within the Islamic community. I think that is correct. But when we ask, Why aren't the moderate Muslims doing more to stop the violence and terror? Why isn't Saudi Arabia doing all it can? we are showing a basic misunderstanding of the relationship between orthodox (radical) and reform (moderate) Muslims.

The essence of the relationship is that it is difficult to win a theological debate when confronted with an orthodox adherent. And would you enter into one when you risk beheading at the conclusion? Orthodox and reform Jews can have these kinds of debates, as can the various Christian sects, and everyone walks away intact. But can a moderate, reformed Muslim confront an orthodox Muslim knowing they will have to disavow parts of the Koran?

Seems unlikely, for individuals, and nations.

Imagine going to your local polling place Tuesday and being greeted by Steve Forbes, or Steve Kalafer, or one of the several hedge fund millionaires and billionaires whose homes dot the Somerset Hills. Could you have been cajoled or intimidated into supporting their chosen candidate?

On November 3, 1908, James B. Duke, Hillsborough resident and millionaire president of the American Tobacco Company set out to do just that - win votes for Colonel Nelson Y. Dungan in his bid to unseat state senator Joseph S. Frelinghuysen of Raritan.


Duke, irritated that the Republican (Republican!) Frelinghuysen had called out the wealthiest Somerset County residents for not paying their fair share in taxes, enlisted the help of Alexander W. Mack, manager of the Raritan Woolen Mills, in organizing the opposition to the first term legislator. Both men directed their hundreds of employees to "vote against Frelinghuysen".


Duke personally visited several polling places in and around Raritan hoping that either the force of his personality, or his unflinching stare would win the day.

It wasn't enough. Frelinghuysen was swept up in a wave of Republican support, winning by 150 in Raritan and 725 across the district. He eventually became New Jersey's first directly elected US Senator in 1916 after the ratification of the 17th amendment, serving one term before returning to the insurance business and retiring to Arizona.
Posted by Greg Gillette at 11:55 AM No comments: