Hillsborough Township's South Branch Hotel, located on River Road just east of the village from which it took its name, has a unique history as first a private residence, then a commercial establishment, and most recently as a private residence once again. The purpose of this article is to primarily examine the middle of the three eras which ran from approximately 1923 to 1976.

Architectural historian Ursula Brecknell, in her 1981 report on the building, suggests that the mansard roof and other architectural details of the three-storied home discredit the oft-reported 1860s construction date. However, the Second Empire stylings of the house, including the belvidere, are consistent with the Captain Davey mansion, another Hillsborough home from that period. Moreover, members of the Veghte family have consistently stated that the home was built in the 1860s by Henry Veghte as the centerpiece of a farm that was once almost 400 acres.


Future New Jersey State Senator William J. Keys bought the house and farm in 1884. He bred racehorses there, renaming the property Ellis Stock Farm after his wife's family. At this time the house was known as Ellisdale Manor.

It is possible that at some point near the turn of the century the property was divided, as the Ellis Stock Farm continued to operate even after New York businessman James Buchanan "Diamond Jim" Brady purchased 117 acres including the house as a summer retreat for his girlfriend, broadway actress Edna McCauley, in 1903. Brady spent a fortune redecorating the house in a "country chic" style - including gaming rooms inside and recreation for his theater and business friends outside.


Diamond Jim Brady might have stayed longer in Hillsborough if Edna didn't run off to Europe with his best friend Jesse Lewisohn in the summer of 1908. By the end of the year, he had sold the farm to capitalist Meshech Frost. Frost was a distant cousin of Robert Frost, giving rise to speculation that the famous poet had visited Hillsborough during his cousin's stewardship of the property between 1908 and 1921 - although detailed chronologies of  Robert Frost's life show this to be unlikely.

Between 1921 and 1923 the property, now known as Fern Manor, was owned by New Yorker A.D. Shortt. The property was next sold to the Hospital of St. Elizabeth of Hungary and operated by the Sisters of St. Francis as a convalescent home. During this time the home was known as Villa Teresa.


The nuns who ran the facility also opened the property in the summer for picnic outings by area Catholic School students - thus beginning the site's five-decade association with religious groups.

Siegfried Schweizer came to the United States as a refugee from Nazi Germany in 1937. At the time he purchased Villa Teresa in 1943 the property had been reduced to just 10.15 acres. He and his wife ran it as a boarding house/rest farm, and also had a summer camp for children. They particularly catered to other Jewish refugees from Europe during the post-war period.

It was in July 1947, during the Schweizer's residence on the property, that one of the most shameful episodes of anti-semitism in Somerset County history occurred when as many as nine Somerville High School boys made what was described as several "automobile raids" on Schweizer's Rest Farm in order to taunt a group of young Talmudic scholars - refugees from Czechoslovakia. The band threw firecrackers at the 40 youths, pulled their beards, and shouted "Heil Hitler". The scholars - all orphans between 15 and 20 years old whose parents had been slain by Nazis - were no doubt reminded of their five years of terror in Europe. The disgusting episode made national news that summer and prompted State Police to place a guard at the camp.

The Schweizers bought another property in South Brunswick in 1951 and sold the rest farm in 1952 to David Weiss. The Weiss family were also refugees from Eastern Europe who spent the war years in England before coming to the United States in 1947. The property, now reduced to just over 8 acres, was renamed the South Branch Hotel. 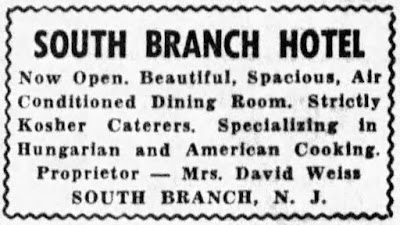 According to a 1958 profile in the Courier News, most of the patrons of the "strictly kosher" hotel were "Jewish people from New York and Philadelphia, who desire to spend their weekends and holidays with people of their own faith and belief."

It was during that year that Mrs. Weiss renovated the hotel - including updating the guestrooms and adding a large dining room. In the summer of 1972, the hotel became the home base for the US Olympic Cycling team.

The hotel was quietly sold in 1976 and for the next 20 years had a succession of owners. The house was used briefly in 1997 by an auction company as a venue for estate sales. 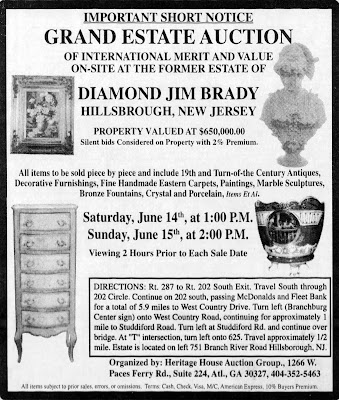 Between 1998 and 2018 the historic home was once again a residence with just a single owner for those two decades. As of December 2019, the house is for sale.
Posted by Greg Gillette at 9:23 AM No comments: