A typical movie set during the silent film era was anything but - silent, that is.  With no live microphones or audio recording of any type taking place, directors shouted out instructions, carpenters plied the tools of their trade, laborers moved equipment to and fro, and clinking cutlery and candid conversation could be heard around the buffet.  All while a serious melodrama or precision-timed comedy was being filmed a few feet away.  Add in the fact that many movies in the teens were produced at studios situated amid the hustle and bustle of midtown Manhattan, and what occurred on East 48th Street one September day in 1918 is even more remarkable. 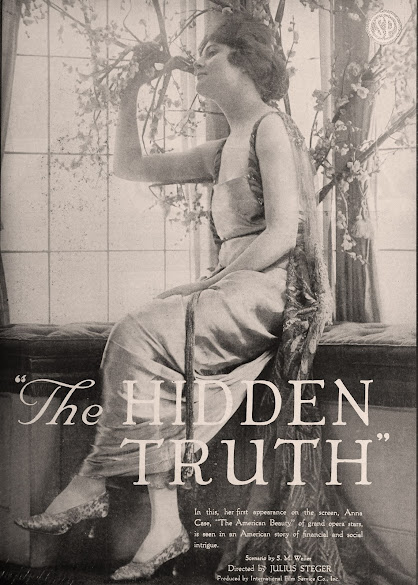 On that day, Metropolitan Opera diva, and noted concert soprano, Anna Case was shooting her first motion picture at the Norma Talmadge Studios.  "The Hidden Truth", directed by Julius Steger - and sadly now lost - called for realistic scenes of drama and action, including singing.  Miss Case, playing an Old West saloon singer who is transported by a series of mistaken identities to New York society, was called on to shoot a scene where she gives a drawing-room recital for friends.


The moment the director called "action" and the first notes of Anna Case's exquisite soprano were heard, the entire studio fell silent.  Tradesmen laid down their hammers, conversation halted, all motion ceased.

Outside on 48th street, deliverymen pulled up their wagons, street merchants who had been hawking their wares were suddenly mute.  People up and down the block hung out of their windows to listen to "America's Favorite Soprano".

﻿﻿﻿
Released by Select Pictures as a five-reel feature in the Spring of 1919, "The Hidden Truth" was not a hit.  Anna Case admitted she had a lot to learn about film acting.  In an interview coinciding with the picture's release, she recalled seeing her performance for the first time, remarking candidly, "as a motion picture actress, I make a pretty good singer".


Despite promotional tie-ins with music stores who carried her records on the Edison label, the movie did little business beyond the initial curiosity seekers. 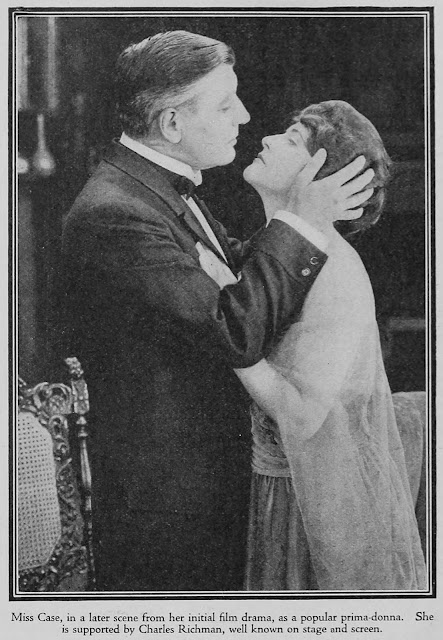 It is impossible today to see for ourselves why Anna Case's acting chops did not translate from the grand opera stage to the movie set, but judging from contemporary reviews, she appears to have been somewhat wooden in her role.  The kindest of reviewers noted that at least she didn't partake in the grandiose overacting so common to melodramas of the period. 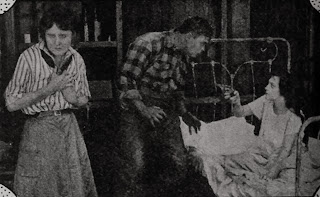 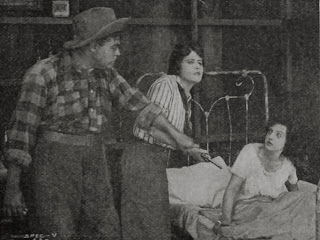 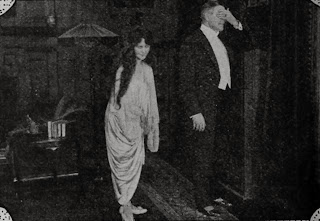 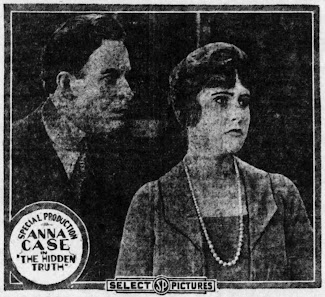 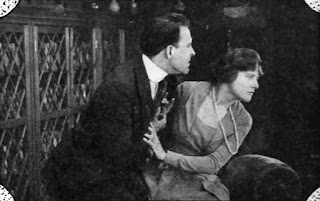 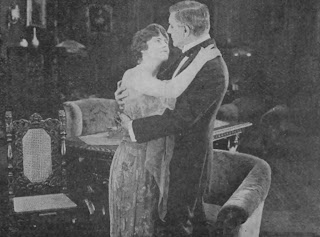 Unfortunately, all that remains of "The Hidden Truth" are these few still photos taken on the set and a sheet of musical cues for the theater organist.

Oh, and perhaps a few notes floating high in the air above 48th Street.
Posted by Greg Gillette at 2:34 PM No comments:

Anna Case Breaks Through in Boris

Anna Case often stated that she was never given her "big break" by anyone - that she earned all of her success through her own hard work and determination.  There is no better example of that than her performance as Fyodor in the American debut of Modest Mussourgsky's "Boris Godunov".

When she stepped onto the stage of the Metropolitan Opera House on March 19, 1913, she brought with her more than just her exquisite soprano voice - namely, ninety-seven superb performances in eleven different supporting roles over a grueling three-and-a-half years.


For years she had been requesting the roles that went with the arias she was singing to rave reviews at the Met's Sunday Night Concert series and in her own concert tours.  She was told repeatedly that she did not have an "above-the-title" name that would sell tickets.  As she recounted for an Opera News reporter in 1970, her reply was, "put me on with Caruso, and I will draw".

Indeed, she did share the stage with Enrico Caruso in a few lesser roles, but it wasn't until she threatened to quit the company - a bold move that shocked the Met's directors ("No one quits the Metropolitan Opera!") - that she was cast as Boris's son Fyodor in Mussourgsky's unique opera.

Almost forty years old by the time of its American debut, Boris Godunov is interesting not only because of its long compositional history - it was extensively reworked by Rimsky-Korsakov after Mussourgsky's death - but also for its use of scenery and costumes.  Sets were not "built out" in the traditional manner, but instead consisted entirely of enormous canvas backdrops, one for each of the opera's eight scenes, painted in a modern, almost cubist, style.  Costumes were not designed but were authentic antique Russian wardrobe of the depicted era.

Anna Case continued in the role of Fyodor until the conclusion of the 1912-1913 season in April.  She would not again grace the Metropolitan stage until December when she would sing what would become her signature role, Sophie, in the American debut of Strauss's Der Rosenkavalier.  Although, from the photo below which appeared in a 1919 issue of Theatre magazine, it seems she held a special place in her heart for the role in which she created her big break!

Anna Case is On the Air

Thomas "Tommy" Cowan made his way carefully up the ladder to the hatchway that led to the roof of the Westinghouse plant in Newark, one hand on the iron rungs, the other gently cradling a few Edison records.  Just the day before, on September 30, 1921, Tommy had called around to the headquarters of his former employer Thomas Edison in West Orange, hoping to borrow a phonograph and some Diamond Discs.  The phonograph, too large to fit through the hatch, had been hauled up the outside of the building and was sitting in the tiny shack that housed the transmitter for one of the nation's first commercial radio stations - WJZ.  This was the day of their first official broadcast - and the first record to be played was "Annie Laurie" by Anna Case. 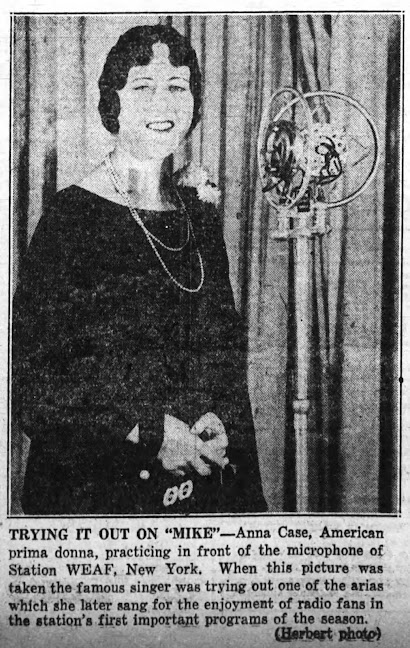 ﻿
﻿﻿﻿It's possible that Cowan requested the Anna Case disc because of a broadcast that originated from the National Electric Light Association's annual convention in New York on September 28.  On that day the former Metropolitan Opera diva and noted concert soprano sang "Ave Maria" and "Oh Mother, My Love" to one of the largest audiences yet in radio's infancy.  Hobbyists and enthusiasts, thirsting for any sort of signal on their receivers, tuned in from as far away as Boston, Richmond, and Pittsburgh.

She followed that up less than two years later with another triumphant radio first.  On June 7, 1923, from the stage at Carnegie Hall, she gave a concert recital broadcast simultaneously by four radio stations: WEAF, New York, WGY Schenectady, KDKA, Pittsburgh, and KYW, Chicago.


It is estimated that up to five million listeners in the US and Canada were able to tune in, making it by far the largest radio audience up to that time.  And that figure probably doesn't include hundreds of fans gathered in the public square in Flemington, where the town set up a primitive public address system to transmit the historic broadcast of the "local girl". Compare that to just four years earlier in 1919 when the twenty-one-year-old Miss Case sang over the radio for the very first from an amateur "wireless" transmitter - station 2ABA located on State Street in Brooklyn. On that day she was heard by perhaps several dozen ships at sea that possessed the expensive radio equipment and a few dedicated amateurs that had the means and the know-how to tune in.
By 1924 Anna Case was such a popular radio performer that when the two leading national booking agencies agreed not to contract with any concert performer who also appeared on the radio - in the belief that ticket sales would be depressed if you could hear the same for free over the airwaves - only one exception was made - Anna Case. While lesser lights were effectively banned from radio if they wanted to maintain their careers, the booking agents knew that Anna Case was too big a star to ever be blacklisted.
﻿
﻿
﻿

Throughout the 1920s and into the 1930s Anna Case could be heard "coast-to-coast" on various radio programs, including a show in 1928 celebrating her twenty years in music.  She also featured prominently on the fledgling NBC radio network. 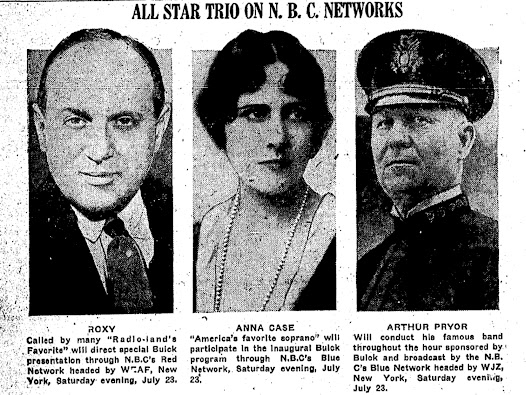 She confessed a fascination for the equipment itself - her younger brother was a radio engineer - desiring to know how each component worked.  It could be argued the essential component was the one that made you walk over and turn the radio on for the first time - and that component was Anna Case herself.
Posted by Greg Gillette at 5:26 PM No comments: