So Good, They Banned It

Check out these two ads from 1962.  Hillsborough's Village Green was the first post-war cluster development in New Jersey. 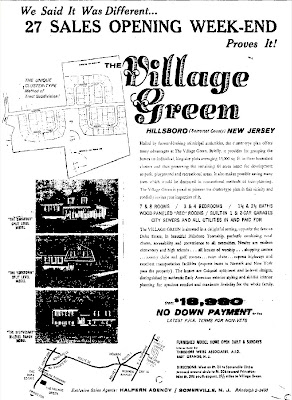 Cluster-zoning allowed for smaller individual lot sizes than the one to three acres usually permitted, with the remaining acreage being reserved for parkland and recreation.


Cluster-type developments were so innovative - and successful - that after Village Green, Hillsborough promptly disallowed future development of this type - a ban that lasted for many years. 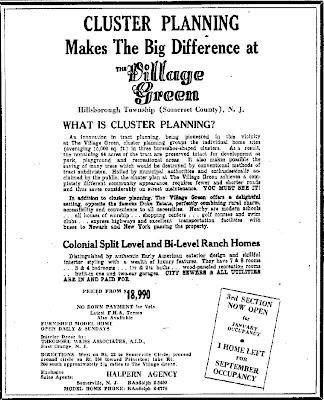 Posted by Greg Gillette at 8:00 PM No comments:

Barbecues, fishing - sounds good.  But what really intrigues me about this September 1956 sales pitch for Hillsborough's Country Club Homes is the promise of "sleeping late".  Fifty-four years later, who among us wouldn't pony up $13,990 for a couple of extra hours in the morning? 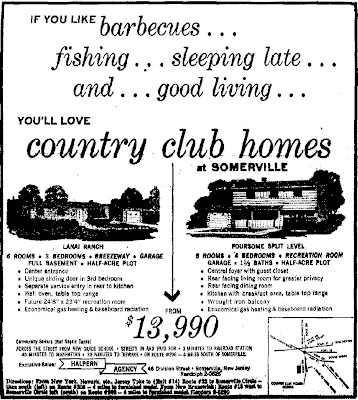 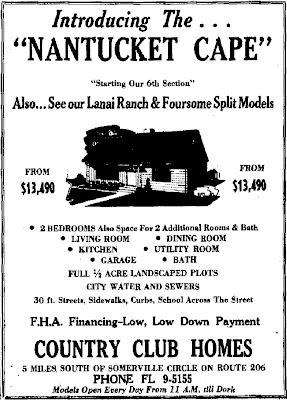 The last time I was in the Country Club Homes development, I believe I spotted a few of these "Capes" in pretty near original condition.  Not bad, not bad at all.
Posted by Greg Gillette at 8:00 AM 1 comment:

Somerset County residents and VIPs who came out on a rainy Saturday morning fifty years ago today for the grand opening of Somerset's first county park may have done a double-take when they looked at their programs.  What had been often referred to as "Raritan River Park", and most recently as "Island Park" had a new name. 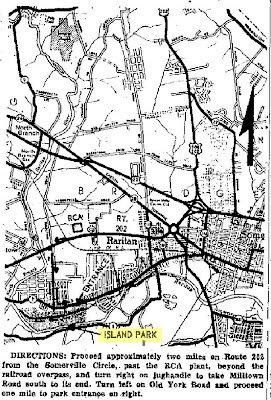 As recently as August 11, the Thursday weeklies were touting the upcoming dedication of "Island Park".
The News-Record even provided a map, showing the location of Island Park on Old York Rd.

But careful readers may have noticed a second news story in the same newspaper - on the same page!

The Park Commission had just selected - indeed had received permission - to use the name "Duke Island Park".  Permission was granted by Doris Duke, who had already been instrumental in getting the park up and running even before the groundbreaking back in February.

The heiress, who resided just across the river on her Hillsborough estate, had provided $30,500 to repair the Headgates Dam, and had donated 55 acres of land - plus trees, shrubbery, and maintenance equipment. 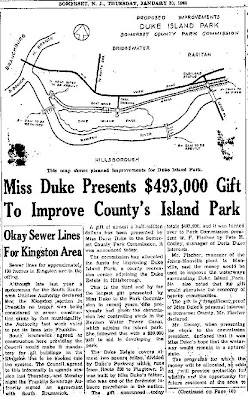 It's obvious that Doris Duke felt an attachment to the park that bore her name. Less than four years after the park was dedicated, she magnanimously gave the county a staggering $493,000 for repairs and improvements - no strings attached.
Posted by Greg Gillette at 8:28 PM No comments:

Scenes from the Hillsborough Family Campout

I brought my camera. 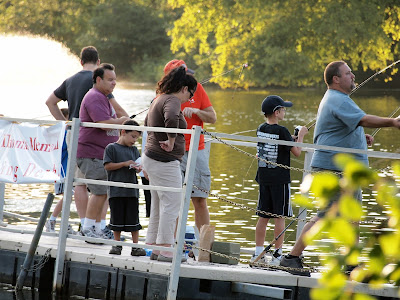 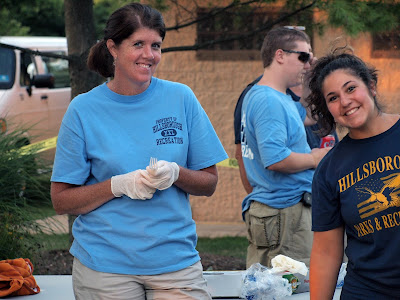 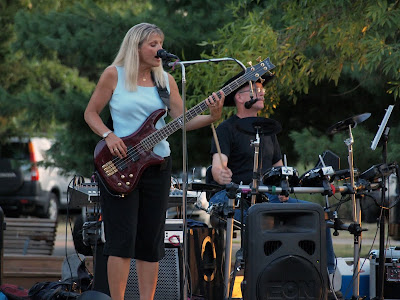 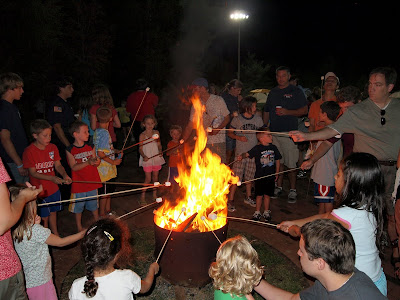 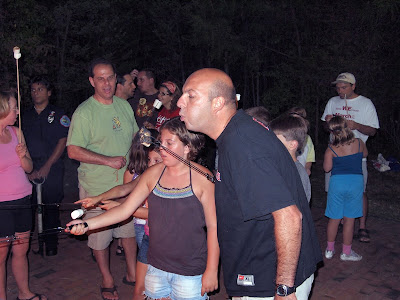 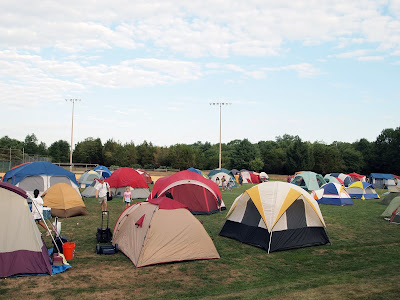 On my way with the kids to Duke Island Park a couple of weeks ago, I pulled off Old York Road to take a few photos of the Hibernia Mine Railroad Bridge. 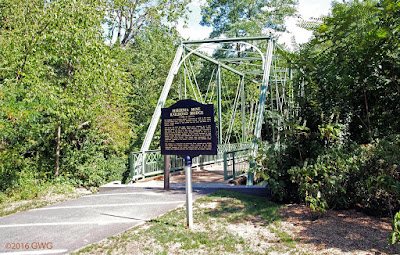 Constructed in 1879 for the Hibernia Mine Railroad, and used as a railroad bridge for fifteen years, the structure has now been incorporated as part of Somerset County's Raritan River Greenway and is in use as a pedestrian bridge over the Raritan Water Power Canal. 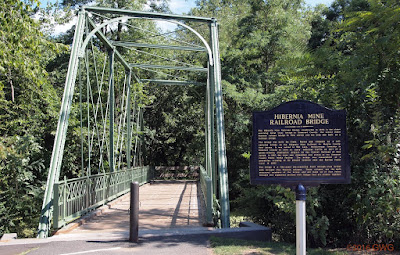 The bridge also received a restoration award earlier this year [2010] from the Somerset County Cultural and Heritage Commission. 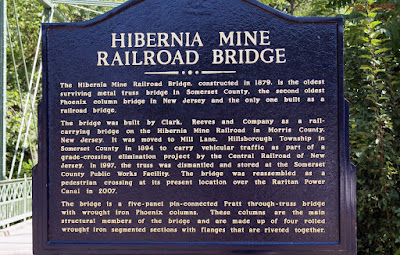 The span also has a connection to Hillsborough Township history.  In 1894, The Central Railroad of New Jersey bought the bridge and moved it from Morris County to Hillsborough - but not for use by their trains.  The bridge was used to carry carriages - and eventually horseless carriages - on Mill Lane over the tracks of the CNJ's South Branch Railroad as part of a grade-separation project. 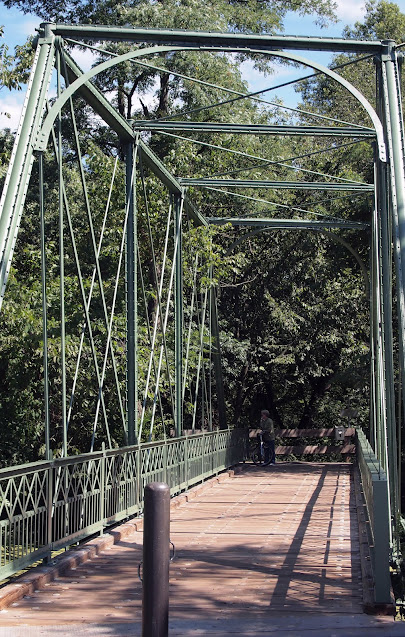 Below is a photo taken by rail enthusiast Michael Kull in the early 1980s showing the bridge in its second location at the end of Mill Lane in Hillsborough. 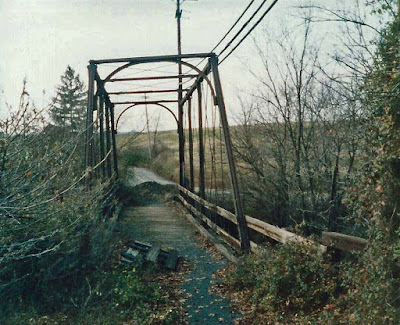