One of the best things about growing up in Freehold was, and I'm sure still is, being so close to the beach.  I guess I didn't really appreciate the proximity until I moved to Hillsborough, and was faced with that hour-plus drive to the shore.

Now, after watching several episodes of Oxygen's reality show "Jersey Couture", I am beginning to think Freehold isn't so close to the shore after all.

"Jersey Couture" is about an upscale women's formal wear/dress shop, Diane & Co., in Freehold.  Freehold Township, really - although thanks to clever use of b-roll in the editing room, you get the idea that the store is in downtown Freehold Boro, instead of on New Jersey's famous Highway 9. 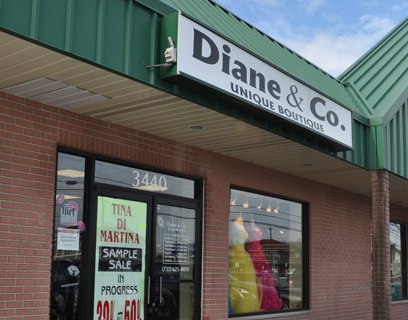 Regardless, in the world of reality TV, "Jersey Couture" is as far from "The Jersey Shore" as "The Real Housewives of Beverly Hills" are from "Ice Road Truckers".

The show centers around Diane Scali - who has been in retail fashion for 30 years - and her two daughters, Kimberly and Christina, who run the business with her.  Throw in Dad, Sal, and little brother, Anthony, and you get the idea. 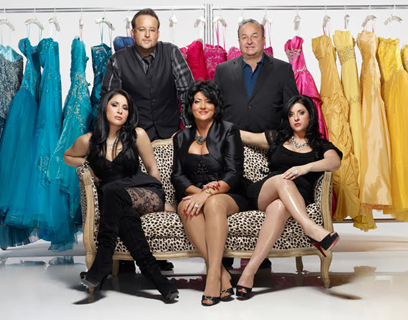 Yes, like all reality shows, there are some stereotypes - Kimberly is the business-minded new mom who wants to have it all, and Christina is the free-spirited single girl who just moved out on her own.  And there is some created drama - will Christina stay with the family business, or will she break away, follow her true passion, food?
But where "The Jersey Shore" is vulgar, "Jersey Couture" is sweet.  Where "The Jersey Shore" is obnoxious, "Jersey Couture" is charming.  This must be the only New Jersey based reality show with no fistfights, no four-letter-words, and no arrests!
The whole family cares about each other, looks out for each other, and has the back of every young lady that walks into their shop.  Yes, this is a NICE reality show.
Maybe that's why there is still no word on whether they have been picked up for a second season!
Posted by Greg Gillette at 11:11 AM 1 comment:

Thin and Getting Thinner

I was about half finished shoveling out today when the guy who delivers the Courier News pulled up and rolled down his window.

Ironic then that Gannett, owner of the Courier News and several other New Jersey papers, officially announced today that they were laying off staff at their three central NJ newspapers - the CN, the Home News Tribune, and the Daily Record.  Only 53 of the 99 newsroom positions will remain after February 4, 2011.

Maybe the delivery guy would be better off just folding the slim offering into a paper airplane next time.
Posted by Greg Gillette at 12:00 PM No comments:

With Verizon set to announce this week that they will be carrying Apple's iPhone, a move that will result in the sales of millions of the high tech gadgets, it's interesting to note that the Hillsborough & Montgomery Telephone Company launched in 1904 with just thirteen customers!

Formed in November of 1903 to serve the rural communities around Belle Mead - southern Hillsborough, northern Montgomery, Millstone, and Griggstown - the company was, by 1971, serving over 3,500 customers.

﻿Even after the upgrades problems with service persisted. An appearance at a township committee meeting on November 20, 1973 by H&M to explain why Hillsborough customers could not get free toll service to Somerville and Manville turned into a general gripe session with both Hillsborough residents and township committee members complaining about service. Complaints included not being able to make calls, and picking up the receiver expecting a dial tone, but hearing someone else's conversation.
By the end of the decade. Hillsborough & Montgomery's 102 shareholders were looking to merge New Jersey's last independent phone company with one of the larger national companies. In October of 1978 they reached an agreement with United Telephone - then the nation's third largest telephone system - to merge the two companies. H&M shareholders received twenty shares of United stock for every share of H&M stock they held.
Posted by Greg Gillette at 11:14 AM No comments:

Twenty-Five years ago, two small linear-shaped lots were donated to Hillsborough Township for the purpose of road construction. The properties, along the old Central Railroad of NJ right-of-way in the vicinity of Auten, Valley, and Roycefield Roads, were on the agenda at a recent township committee meeting after it was discovered that the two parcels were mistakenly included in Hillsborough's Recreation and Open Space Inventory (ROSI). A public hearing was held on the proposal to remove block 143 lots 11.03 and 7.19 from the ROSI.

All of which begs the question -what road construction project was envisioned in 1985?

The news outlets all reported these two lots as being located "along Auten Road", and as being intended for "road widening". Clearly that is not the case. The lots are NOT along Auten or any other road. They are landlocked parcels in a commercial and industrial zone, north of Valley Road, between Auten and Roycefield.

It is my opinion that the two properties were acquired in anticipation of a NEW road, perhaps something like this:

This route would be a new alignment of New Center Road, past the intersection with Auten Road, eastward along the abandoned Central Railroad of New Jersey right-of-way, crossing Roycefield Road, and then more directly east, skirting the southern boundary of Duke Farms, before intersecting Route 206 at Brook Boulevard.

Would a plan like this be feasible now, twenty-five years later? It is no secret that Duke Farms' ambitious plans for a transformation of the Doris Duke Estate into an environmental center and park - including turning the farm barn south of Dukes Parkway into a new visitors' center - would benefit from making use of Dukes Parkway as a de facto entrance road, for no other reason than visitors will have to cross Dukes Parkway to access the bulk of the property after parking at the visitors' center.

Somerset County already owns some of the property in the vicinity of Roycefield Road, and with the mercury now gone from the South Somerville Depot, there may be a future opportunity for more land acquisition nearby. A new road providing access through this area could be useful.

Just something to consider.
Posted by Greg Gillette at 10:01 AM No comments: