John G. Muirhead was burnt out. The massive amount of work that it took to put on Trenton's annual Interstate Fair for the better part of a decade had finally taken its toll. After being one of New Jersey's leading pottery manufacturers, a serial entrepreneur in many other enterprises, and sitting on the boards of other corporations, the Fair was supposed to be a lighter endeavor. Now as the 19th century was drawing to a close, Mr. Muirhead needed a vacation. 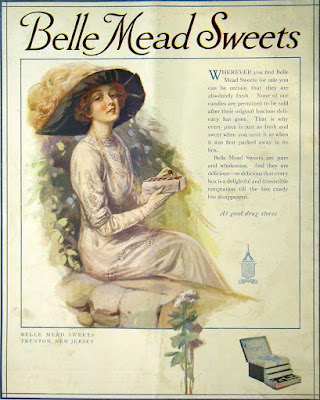 When he got back, he called on two trusted employees that had worked for him at the Fair - M.G Rockhill and Scott Scammell - and presented an idea. They would build a small factory at Belle Mead and go into the fruit-preserving business. Despite none of the partners having any idea what fruit-preserving entailed, they acquired the land and began construction. It was only after the building was half up that they discovered there was no adequate source of raw materials - fruit! - within a thousand miles!


What else could they do with the factory? After some thought Mr. Muirhead declared, "There is no candy on the market that really satisfies me." The selling point would be that all of the candy was absolutely pure - no artificial colorings or flavorings of any kind. The more subdued color of their candies, where the natural fruit juices supplied all of the hues, would be proof of the purity.


Without any money to hire a sales force, the newly christened Belle Mead Sweets hit upon a plan of selling only through exclusive arrangements with individual druggists. Samples were sent out in the absolute best packaging they could afford and one establishment in each town was selected to be the authorized dealer.


The plant completed in 1901 in Belle Mead was tiny. On the first floor, glass partitions separated Mr. Muirhead's office from the factory floor so that he could look out as the fruits were hand-dipped in chocolate and packed for shipment. The second floor held the dining room where managers and employees dined together at noon. 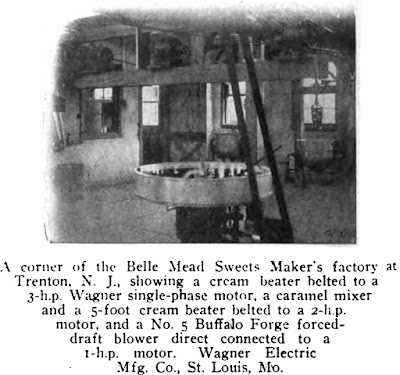 Within a couple of years, Belle Mead Sweets had outgrown Belle Mead. Foreshadowing the challenges the US Army would face at their Belle Mead Depot 40 years later, the available workforce at Belle Mead was just too small for the growing manufacturer. A move to Hopewell for a few years was followed by a final move to Trenton, where John G. Muirhead handed over the company to his younger brother Harry - and probably went on another vacation!
Belle Mead Sweets seems to have gone out of business at some point in the 1940s.
Posted by Greg Gillette at 8:00 AM 1 comment:

The Neshanic Dutch Reformed Church began construction in 1759 and was completed by 1772, one year after Hillsborough Township received its royal charter. There was most likely an inn near the church at that time, as Amwell Road was already an important stagecoach route in the latter half of the 18th century.

The present Neshanic Hotel, however, dates to the middle of the 19th century. Along with the church, it is one of the iconic structures of the village of Neshanic, listed on the National Register of Historic Places in 1979. The four larger rooms on the ground floor served for banquets and meetings - indeed the Hillsborough Township Committee at least occasionally met here before the first municipal building was erected in 1931. The second floor contained as many as six guest rooms - reconfigured into rental apartments later in the 20th century. The third floor was mostly an excuse to include the small windows as a design element.

According to Ursula Brecknell in her book "Hillsborough - An Architectural History", the last use of the hotel for its intended purpose was by the road crews who paved Amwell Road between Neshanic and Clover Hill in the 1920s. As she writes, "The foreman later married the widow who kept the hotel, and the couple then chose to close its operation."

The significance of the Neshanic Hotel to Hillsborough history is not in its ordinary mid 19th century Italianate architecture, but rather in its location and importance to the historic village of Neshanic. Let's hope the hotel can be restored and preserved and continue to serve as a reminder of Hillsborough's past.
Posted by Greg Gillette at 11:27 AM No comments:

Conductor Kline of the Central Railroad of New Jersey's South Branch division stepped out of the cab of his idle locomotive and walked with trepidation towards the Neshanic bridge. He had left Flemington at 5:40 pm and had already run through 15 inches of water between Woodfern and Riverview, but this was a different situation entirely.

The South Branch of the Raritan River had been rising since 9:00 am that morning of February 6, 1896. By the afternoon, Bound Brook was under six feet of water, and Somerville wasn't much better. All of the bridges across the Delaware and Raritan Canal were not just washed out but were actually swept away in the floods. Residents in the towns and villages were huddled on the second floors of their residences as floodwaters raged through the streets.  Debris of every kind, including drowned livestock, could be seen floating down the Raritan from Somerville to Bound Brook.


All of the area railroads had already halted traffic as the Millstone, Raritan - North and South Branches as well as the main stem - and the Neshanic overflowed their banks. At the Black Point bridge near the mouth of the Neshanic River, the water was already fifteen feet above normal. The situation at the Neshanic bridge was not good. Rising waters were above the level of the railbed, and raging. Kline called the engineer out to take a look. The bridge abutments had been partially washed away, but the bridge seemed secure.
Like a scene from a movie, the conductor and engineer walked back to the locomotive, climbed aboard, and decided to go for it. The engineer built up a head of steam and sent the train speeding over the river into Hillsborough. Once across, they looked back and saw one of the two sections of the steel bridge collapse into the river and be carried downstream in the torrent.

They brought the train safely into Somerville - and just in time. By 10:00 pm the Raritan at Somerville had risen twenty-five feet.
Posted by Greg Gillette at 4:54 PM No comments: