On the morning of August 9, 1894, friends, family, and dignitaries both local and national gathered at Newark's Military Park to pay tribute to and unveil a statue of one of the 19th century's most prominent Americans, Frederick Theodore Frelinghuysen. The keynote speaker was US Ambassador to Germany Theodore Runyon who spoke for a full thirty minutes on the extraordinary life of the Hillsborough Township native.

Frederick T. Frelinghuysen was born on August 4, 1817, in Millstone, NJ into one of the most storied families in Somerset County history. He was descended from Rev. Theodorus Jacobus Frelinghuysen who emigrated to America from Holland in 1720 and organized nearly all of the early Dutch Reformed Churches in Somerset, Hunterdon, and Middlesex Counties. The Reverend's second son was Rev. John Frelinghuysen who was instrumental in starting the school that became Queen's College, now known as Rutgers University. John Frelinghuysen's son, the grandfather of our subject, was General Frederick Frelinghuysen - a graduate of Princeton University in 1770 where he was a classmate of future President James Madison, an artillery commander at the battles of Trenton and Monmouth, and a member of the continental congress.

General Frelinghuysen had three sons. The youngest, Frederick, the father of our subject, was educated at Princeton and practiced law in Millstone. He died suddenly in 1820 at the age of thirty-two, leaving his widow the former Mary Dumont (daughter of wealthy Hillsborough landowner Peter B. Dumont), three daughters, and two sons - the youngest being Frederick Theodore Frelinghuysen, just three years old.


The young boy was soon adopted by his uncle, the General's second son Theodore Frelinghuysen. He could have wished for no better mentor as his career closely followed the path of his distinguished uncle.  "Fred", as he was known to his friends, entered Rutgers as a sophomore and graduated in 1836 at the age of nineteen. After a further three years of study in his uncle's law office in Newark, he was admitted to the bar in 1839.

Well known for his commanding oratory, Frelinghuysen inherited his uncle's law practice and made a great success representing the New Jersey Central Railroad Company. In 1842 he married Matilda Griswold and together they had three daughters and three sons. He was appointed to a six-year term as New Jersey Attorney General in 1861, and then appointed by Governor Ward, to fill the unexpired term of US Senator William Wright in 1866. In 1871 he was elected by the NJ legislature to a full six-year term as senator.

Frelinghuysen's time in the Senate was filled with contentious debate over Reconstruction, the impeachment of President Johnson, and the contested 1876 presidential election results. His strong patriotism, and his enduring Christian faith, along with his skills in rational argument, served him well during his Senate career.


A change in the political makeup of the New Jersey legislature from Republican to Democrat denied Frelinghuysen a second full term in the senate but in 1881 after the assassination of President Garfield, Chester A. Arthur, in one of his first acts as president, appointed Frelinghuysen as Secretary of State. It was during these years that he played host to the president on several occasions at his 150-acre Hillsborough Township estate. The property, inherited from the Dumont side of his family, is on the south bank of the Raritan River on River Road and is the wooded lot now owned by Duke Farms. It was here that President Arthur courted Frelinghuysen's daughter, Tillie, leading to rumors that marriage was certain. However, it was not to be. 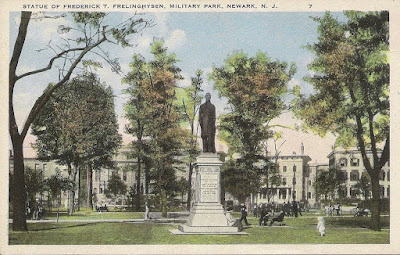 Arthur decided not to run for reelection in 1884, and Frelinghuysen retired to his home in Newark upon the inauguration of the new administration in March 1885. Almost immediately upon his return he fell ill and lapsed into a coma, dying peacefully in his home on May 20, 1885. The city of Newark, in combination with its leading citizens, commissioned a bronze statue of Frelinghuysen to be placed near his home in Military Park. Hartford sculptor Karl Gerhardt designed the nine-foot-tall statue which sits on a granite pedestal twelve feet high. A fitting monument to a great statesman.

Posted by Greg Gillette at 5:43 PM No comments: