According to the National Park Service, Hillsborough Township's early 19th-century stone bridges included on the National Register of Historic Places are two of just twenty such bridges still standing in Somerset County. I would propose that we might add a third, later bridge to that list.

The Cat Tail Brook Bridge - spanning the stream of the same name on Montgomery Road - is Hillsborough's oldest document stone bridge. The single-span arch bridge was constructed in 1825 by B.J. Gray, supervised by Mssrs. Stryker and Cruser, and assisted by stonemasons John Rowland Jr. and Thomas Stout.
The thirty-foot long bridge is made of local fieldstone. The arch - with a ten-foot span - is made of quarried stone. The bridge can not be called elegant, but the simple fact of its nearly 200-year service to the community attests to the workmanship of the builders.

The Rock Brook Bridge is so similar in construction method and materials to other bridges in the immediate area - notably the 1822 Opposum Road Bridge in Montgomery Township - that we can comfortably ascribe a circa 1825 date to this important span.
Originally possessing three arches, an 1891 torrential rainfall washed out the third span. It was quickly reconstructed as an open span, necessitating some new stonework at the center arch and the east abutment. The original stone walls have also been replaced by modern guardrails. Despite these changes, the 41-foot long, 16-foot wide bridge retains its historic integrity and serves its purpose ably to this day.

The Hoepfner's Brook Bridge on Township Line Road which spans a small tributary of the Millstone River dates to the late 19th-century. The bridge has not been researched and little is known about the circumstances of its construction.
Although its single 10-foot span and fieldstone construction make it visually similar to Cat Tail Brook Bridge, the use of brick for the arch sets it apart. Like the Rock Brook Bridge, a modern guardrail has been in place for a long time.
Posted by Greg Gillette at 4:26 PM No comments:

Of all the historic bridges in and around Hillsborough, perhaps none have been more important in the commerce and communication of the township than the series of bridges spanning the Millstone River in the village of the same name.

When the first bridge was constructed - probably around 1725 - the Delaware and Raritan Canal was still more than 100 years in the future; the railroads after that. The most direct route to the market town of New Brunswick, and its port, was overland by wagon road. Throughout the 18th century, the farmers of Hillsborough depended on the road and the bridge to get their produce to market. 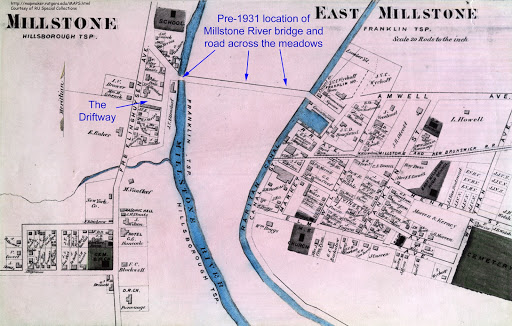 We don't know exactly what the bridge or bridges that existed in the 1700s looked like, but there are a few things we can say for certain. The bridge would have been wooden, and, the width of the river being too great for a single span, a stone pier would have been required midstream. 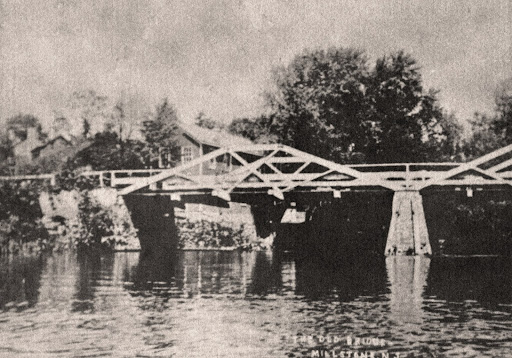 The photo above of the late 19th-century version of the Millstone River Bridge gives a good idea of the configuration of the wooden bridges. We also know those earlier crossings were not in the location of today's bridge but rather just to the north - intersecting with what today is called North River Street.
In 1901 the Somerset County Freeholders commissioned a new bridge at the same location. Originally envisioned as being two spans supported with a stone pier in the middle, the design was changed to a single-span iron bridge.
Although referred to as the "Millstone Causeway", the pedestrian boardwalk was the only element other than the bridge itself that was elevated. The roadway between the river and the Delaware and Raritan Canal was at ground level across the meadows.
Flooding of the meadows - which may have only been a nuisance in the 18th and 19th centuries - was considered much more of a serious issue in the 20th. As the area became more developed, properties, especially the commercial and industrial businesses in East Millstone, became very valuable. Constant flooding - not just in Millstone but also in Weston and around Bound Brook - made it impossible for the local fire companies to reach East Millstone during an emergency.
It was said that any measurable amount of rain would flood the roadway. This was not such a problem in the days of horses and carriages which could navigate a little water, but in the age of the automobile, it was a disaster. In the 1920s, busses would regularly unload their passengers at one end of the boardwalk and have them walk across to a waiting bus at the other end to continue their commute. But ultimately it was a devastating fire in East Millstone - with fire companies from Manville, Somerville, and Bound Brook unable to reach the town - which led to the consideration of a completely new elevated causeway.
The original proposal called for the repaired and strengthened 1901 bridge to remain in place and connect to a new concrete causeway across the meadow. On the East Millstone side, Somerset County officials negotiated with the Pennsylvania Railroad - owners of the canal - over what to do about the canal bridge. These initial plans failed to address the centuries-old problem of the bridge not actually leading to Millstone River Road but rather to North River Street.
A solution was found with the county's acquisition of a small private road called "The Driftway". Never a public thoroughfare, the short street leading from North and South River Street to Millstone River Road became the perfect path for a brand new bridge and causeway. Plans were drawn up in 1929 and preliminary engineering work took about six months. The Courier News gave the statistics for the new bridge and causeway in an August 1931 story heralding the completion of the span:

The bridge is of three spans and is 135 feet long, made of concrete and steel. The causeway starts from the east end of the new bridge and extends for 665 feet, ending in a 300-foot fill connecting the road with the bridge over the Delaware and Raritan Canal in East Millstone. The centers of the 25 spans in the causeway are 27 feet apart. The roadway is 24 feet wide, and approximately 10 feet above the meadow.
A sidewalk, five feet, three inches wide extends along the northerly side of the highway for pedestrians. The piers under the causeway rest on piling, approximately 8,460 lineal feet being used, the piles reaching bedrock 19 feet below the surface. The causeway carries attractive sideway of ornamental concrete and is illuminated with cluster lights at the top of ornamental concrete pillars.

The Millstone Causeway underwent extensive reconstruction in 1998 and continues today as a vital link in Somerset County's 300-year-old transportation network.