Some photos I took this month while hiking at Duke Farms.

If you've ever driven past the old Hillsborough Township municipal building on East Mountain Rd. (the original Amwell Rd.) you have no doubt noticed the boulder on the front lawn. Today the boulder displays a rather nondescript sign with the words "Hillsborough Township Department of Public Works", but not very long ago the big rock displayed an entirely different message. 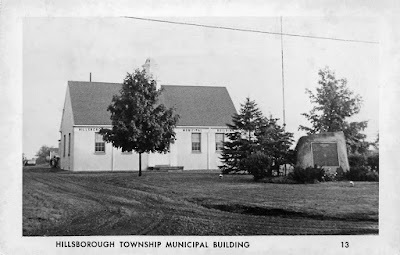 On May 9, 1943, Hillsborough Township unveiled it's War Honor Roll with the names of 190 Hillsborough members of the armed forces and merchant marine standing out in bold relief from a plaque affixed to the boulder in their honor. Hillsborough's opera star Anna Case Mackay sang The Star-Spangled Banner, The Battle Hymn of the Republic, and her new composition Hallelujah! Hallelujah! We'll Pull Together backed by the Belle Mead Army Service Forces Depot Band.

Professor C. Elliott Smith of New York University was the emcee and the Belle Mead Depot chaplain gave an address. They were joined by Depot commanding officer R. Potter Campbell and other dignitaries.

After the war, more names were added - denoting the over 300 Hillsborough men and women who served in World War II. The plaque can be seen today at the Garden of Honor at the new (25-year-old!) municipal complex on South Branch Road. 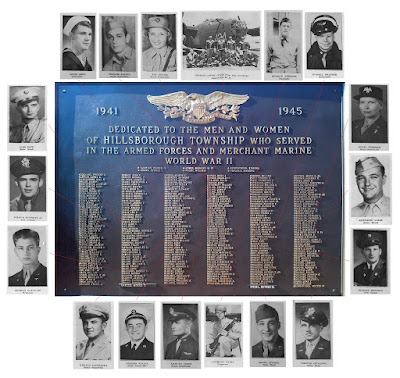 In December 1943, the Somerville Trust Company published an 8-page large format folio, possibly a newspaper supplement, with photos of Somerville area servicemen and women. I surrounded a recent photo of the plaque with the eighteen Hillsborough veterans that were included. I encourage readers to click on the image when you are at your computer to get a better look at the photo and all of the names.
Posted by Greg Gillette at 8:00 AM No comments:

Around 1830 the inhabitants of Branchville, now known as South Branch, decided they needed a church of their own. Nothing much came of the idea until 1842, when a committee was formed to discuss the plausibility of raising enough money to build a church in the quiet Hillsborough hamlet on the south branch of the Raritan River. It was found that there were enough funds to erect a church building, but probably not enough to support a minister.

On December 17, 1849, townsfolk, many descendants of the original Dutch settlers of the village, met at the schoolhouse across the river in Branchburg - just north of the present one-room school -  to take up the matter once again. They soon had fifty-eight families committed to uniting and forming a congregation connected with the Dutch Reformed denomination.

Things moved more quickly now, with the Classis of New Brunswick approving the church organization in April, and the membership meeting again at the schoolhouse on May 14, 1850, to officially be designated as "The Dutch Reformed Church of Branchville". They immediately began planning the construction of the church. The site was donated by the Amerman brothers, and a contract was made with William A. Voorhies of Griggstown for $3,174.

The building was modeled after the recently completed church in Whitehouse. It is in the classical Grecian style, with fluted columns at the entrance that are set within the porch area - a feature of churches of this type in New Jersey. In her book, Hillsborough: An Architectural History, the architectural historian Ursula Brecknell gives us this interesting serendipitous tidbit.


Although rules existed for determining classic relationships of pediment to columns and again to the angle of pitch of pediment, they were largely ignored by 19th-century architects for numerous reasons; accordingly the matter of obtaining aesthetic relationships depended primarily on the skills of the carpenter for the "felt line". One of the graces of the South Branch Church is its success at this point in having a pleasing ratio.

Reportedly President Chester A. Arthur attended services here in the 1880s during one of his many visits to the country home of his Secretary of State Frederick T. Frelinghuysen. But the most famous member was future operatic soprano Anna Case who attended services and sang in the choir from the 1890s to around 1906. Much later she gifted her family's home - directly south of the church - to be used as the second parsonage.

Posted by Greg Gillette at 12:54 PM No comments: