When I was going to school, there was always one kid with that unfortunate February 29 birthday. How unlucky. I always wondered if maybe he later picked the lotto, or hit a pick 6 at the track - just to even things out. I mean, what could be worse than only having your birthday once every four years! 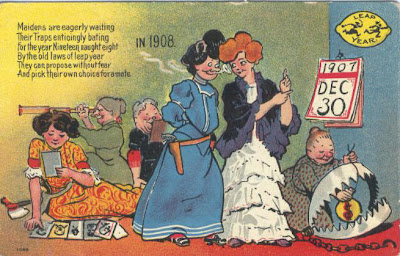 In the latter part of the 19th century the popular notion was that leap year was the only year a woman could propose marriage. Men were permitted to decline however - and wouldn't that be anticlimactic after four years of planning. And remember, there was no leap year in 1900 - only century years divisible by 400 get the extra day.

The purpose of leap year of course is to try to squeeze the earth's 365 1/4 day calendar into man's 365 day calendar. Leap year - with the century years rule, does a pretty good job of keeping the vernal equinox on March 21. And that's really what this is all about.

Hey, I just discovered a worse birthday than Leap Day!
Posted by Greg Gillette at 7:22 PM