Courier News readers who made it to page 24 on March 16, 1990, surely took note of the obituary for Levi Esh. The Lancaster County, Pa. native passed away the day before, leaving 11 children, 73 grandchildren, 93 great-grandchildren, and thousands of customers who visited his Amish food stand at Packard's Farmers Market in Hillsborough over the previous four decades. Remarkably, the very next day, officials from Packard's announced that they were going out of business.


In 1926, 25-year-old Rutgers graduate Arthur "AJ" Packard started the Atlantic Trading Corporation in New Brunswick. He and his wife Asta built up the business - which was concerned mainly with livestock feed and grain - over the next ten years before relocating to Somerville. They were successful enough to also acquire interests in other local businesses such as the Somerset Mills, and some commercial farms.  Packard became something of a public figure in Somerville during this time, even being elected to the school board in 1940.


While their businesses were thriving, Mr. and Mrs. Packard's marriage was failing, and he ended up getting a Reno, Nevada divorce in 1948 citing "extreme mental cruelty" inflicted on him by his wife. Searching for a new venture, Packard began visiting open-air markets, particularly the one in Quakertown, Pennsylvania.  On April 20, 1949, he opened his own similar market on Route 31 - now Route 206 - in South Somerville just north of the Lehigh Valley Railroad crossing.


Packard's Market, as it was originally known, was a huge success right from the start. Besides the outdoor stalls, indoor space was provided in a large frame building. By the fall, ten to fifteen thousand customers were visiting the market's 400 vendors on the two days a week - Wednesdays and Fridays - they were open.
According to a profile in the Home News, big sellers that first year were, "dry goods, farm produce, household furnishings and equipment, books, deep freezers and almost everything else between radio-phonographs and razor blades." Mr. Packard was justly proud of one of the largest selections of men's slacks in the state!

Vendors had the option of putting items not sold during the day into an auction held in the evenings. Packard's also regularly offered space for community groups to hold their charity and fundraising rummage sales. With hundreds of vendors, there was an overlap of some merchandise offerings. This caused Mr. Packard to be concerned about price-fixing among his vendors. He hated it. If he found collusion between two sellers, he simply brought in a third to undercut each of them!

One of the most popular vendors during the days of the original Packard's Market was Gertie Drake whose Odds and Ends stall was filled with thousands of household items. Ms. Drake was there from the first day in 1949 until the last in 1990.

Leon and Helen Rubin's produce stand was also at Packard's from the beginning. On market days, they would awaken at 2 a.m. to arrive at Philadelphia's Galloway Street market by 4 a.m. in order to get the best selection of fruits and vegetables to bring to Packard's for the 9 a.m. opening.


Undoubtedly one of the biggest, and best-remembered, draws for almost the entire run of the market was the Amish. Levi Esh began bringing his clan to Packard's on Wednesdays and Fridays in 1950 - the second year the market was open. A hired driver would pick up the goods  - cold cuts, cheese, pies, and of course their delicious pretzels. - beginning at 4:15 a.m., then collect the family members for the long three-hour ride to Hillsborough.

The opening of Packard's Market in 1949 coincided with A.J. Packard's move to Hillsborough and marriage to second wife Alice. He once again became a fixture in the community, becoming involved in politics and civic organizations, and serving on township boards.


In November 1952, a $100,000 fire caused by a dropped oil stove which was being moved threatened to put Packard out of business. Instead, in less than six weeks he had a plan for a $190,000 re-build - a brand new Packard's with 30,000 square feet of indoor/outdoor space for vendors, and a 10,000 square foot, air-conditioned supermarket.
The final design was not nearly as elaborate as the architect's concept, as shown above, instead consisting of the familiar long rectangular block building.

The supermarket required a seven day a week schedule - and Sunday was added to the Wednesday and Friday schedule of what was now called Packard's Farmers Market.

A.J. Packard passed away unexpectedly from an apparent heart attack on October 15, 1964. Alice Packard, a former Princeton elementary school principal, continued to run Packard's through the end of the decade.

The sixties were a time of transition for Packard's. Significantly, there were far fewer vendors - decreasing from 200 in 1952 to probably around 100 in 1970. Despite being open a relatively brief twenty-one years, there was already something nostalgic about Packard's. Newspapers picked up on this and began to run the first feature stories about the market.

Favorite vendors during this period included glassblower Ray Keller, George Price with his tricks and novelties, antique salesman Harold Hayes, and Harold Hogbin who sold trees and shrubs in the evenings. In 1970 Mrs. Packard sold the market and the 30-acre lot to West Essex Industrial Park for $345,000. She stayed on as manager for a short time until Packard's was sub-leased to Mash, Inc. Becky Sanislo became the manager around this time.

Packard's suffered its second major fire in the early morning hours of July 8, 1972. Officials noted the cinderblock construction and the use of fire doors between each of the five sections of the 600-foot-long building prevented the fire from spreading from the northernmost section throughout the structure and possibly reaching the large ammonia tanks of Hammler Industries at the southern end of the property. Unlike the 1952 fire - and despite the fact that the Amish store of Levy Esh had to be relocated to another part of the building -  Packard's was up and running again fairly quickly.

No one who shopped at Packard's Market in the 1970s or 80s could have missed Carmelo Musumeci. The retired diesel mechanic sold foam in every shape and size - generally for upholstery repair, although he would tell you that his customers came up with all kinds of uses.

Customers also frequented the ceramics stall owned by Joan Chiesa, Gus Gerhardt's antiques, and the curiosities brought by Steve Woody, who owned the Oldies but Goodies shop in Somerville.


Packard's didn't fully recover from the 1972 fire until the opening of Building #6 in July 1976. Space lost in the fire was restored - and more space was added.


In 1973, Leo Nadel took over the pickle stand that had been run by his cousins since 1965 - thereby becoming the Pickle King of Packard's. Not bad for a guy who spent most of his career in women's undergarments - selling them, that is.

Another seller who began in the mid-70s and continued throughout the 1980s was Montgomery resident Kathleen Rusher who tantalized kids and adults alike with her toys, candy, and hundreds of novelty gags.

In the late 70s and 1980s, Tom McDonald was the on-site manager and also had his own business, the Jewelry Exchange. In 1985, further expansion and reconfiguration of Packard's allowed more space for the Amish stand, which remained one of the most popular attractions through the end of the decade.


The mid-80s also saw the introduction of Pulaski Deli to the food lineup, as well as Saturday hours.

In the latter half of the decade, rising operating costs and a decline in revenue began to take a heavy toll on Packard's. On the last official day of operation, April 29, 1990, manager Tom McDonald cited insurance costs, property taxes, utilities, and waste disposal as contributors to the decision by West Essex Industrial Park to close the market.

Packard's was no longer able to attract the customers needed to compete with the discount stores, and the 38-acre site was potentially more valuable with something else on it. McDonald scrambled to come up with a plan to at least keep part of the market open, but there was just no feasible way to do it - although he did allow some vendors to stay on for a few weeks after the official final day.

The closing was not only a blow to loyal customers, but also to the vendors, some of whom had been selling at Packard's since 1949. Gertie Drake told The Courier-News, "I never thought of leaving here." Eighty-two-year-old Betty DuFour, who had been selling eggs at the market since 1965, said she wasn't able to find anyplace else to work, and would just stay home, adding, "My customers are very faithful to me, and I'm going to miss them very much." 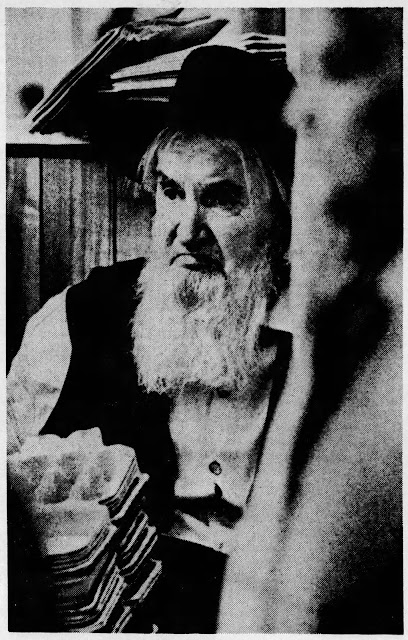 In the end, the Packard's site languished for a few years while West Essex tried to put together a development plan, then was in use as an auction site for a decade between 1996 and 2006.

Hillsborough residents past and present recall Packard's Farmers Market fondly. Perhaps no local business conjures up such vivid memories - the sights, the smells, the tastes, the Amish! Levi Esh and all of the vendors would probably be pleased that they are so well-remembered - even after all these years.
Posted by Greg Gillette at 7:46 AM